Once again we have mixed results.

Two of the six most polled Democrats (Biden and O'Rourke) improve their positions in the probabilistic view when you combine the results of all of those polls.

The other four (Sanders, Buttigieg, Warren, and Harris) slip in their matchups against Trump. Some weaken significantly.

So let's start with the national "Odds of a Democratic Win" view: 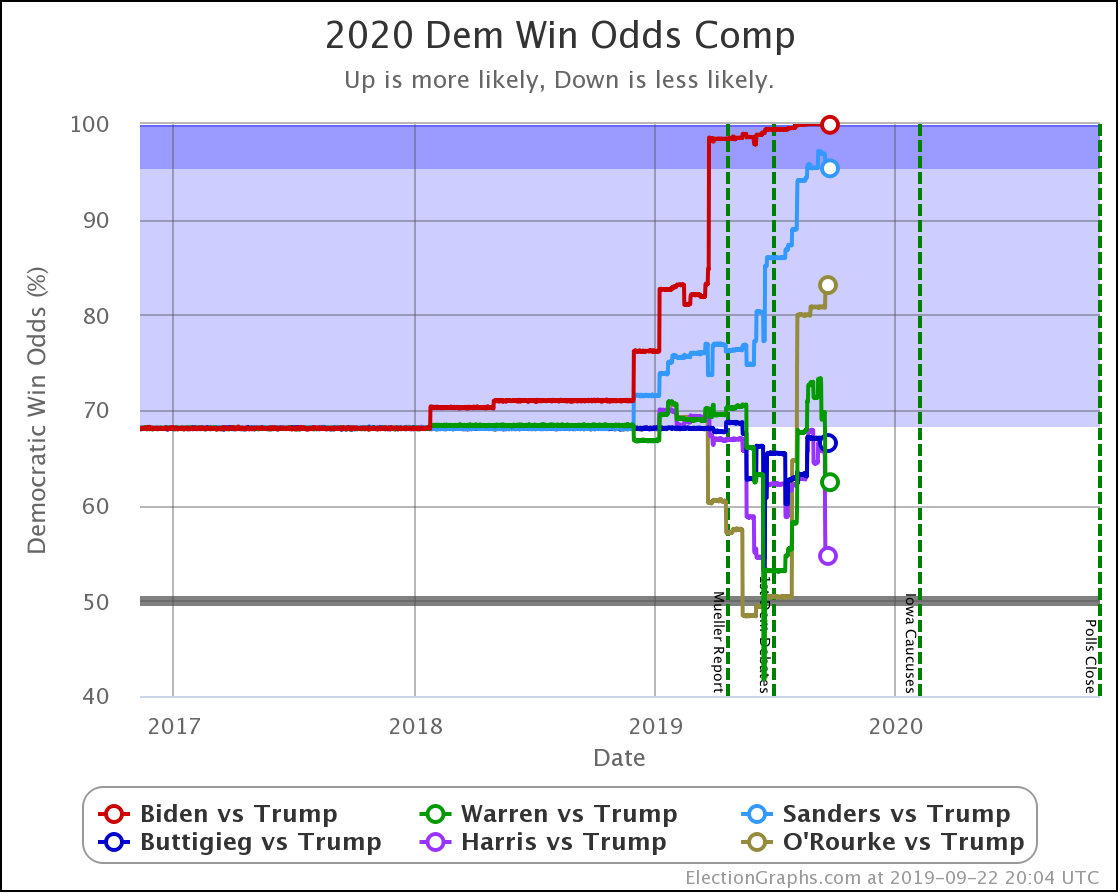 The two that stand out here are Warren and Harris. The new polls this week hurt their win chances significantly. Harris is now looking only slightly better off than a coin toss in a race against Trump.

We'll look at each state to determine where these changes are coming from, but first, you can also see this pattern dramatically when looking at the "Median Case" from the Monte Carlo simulations. 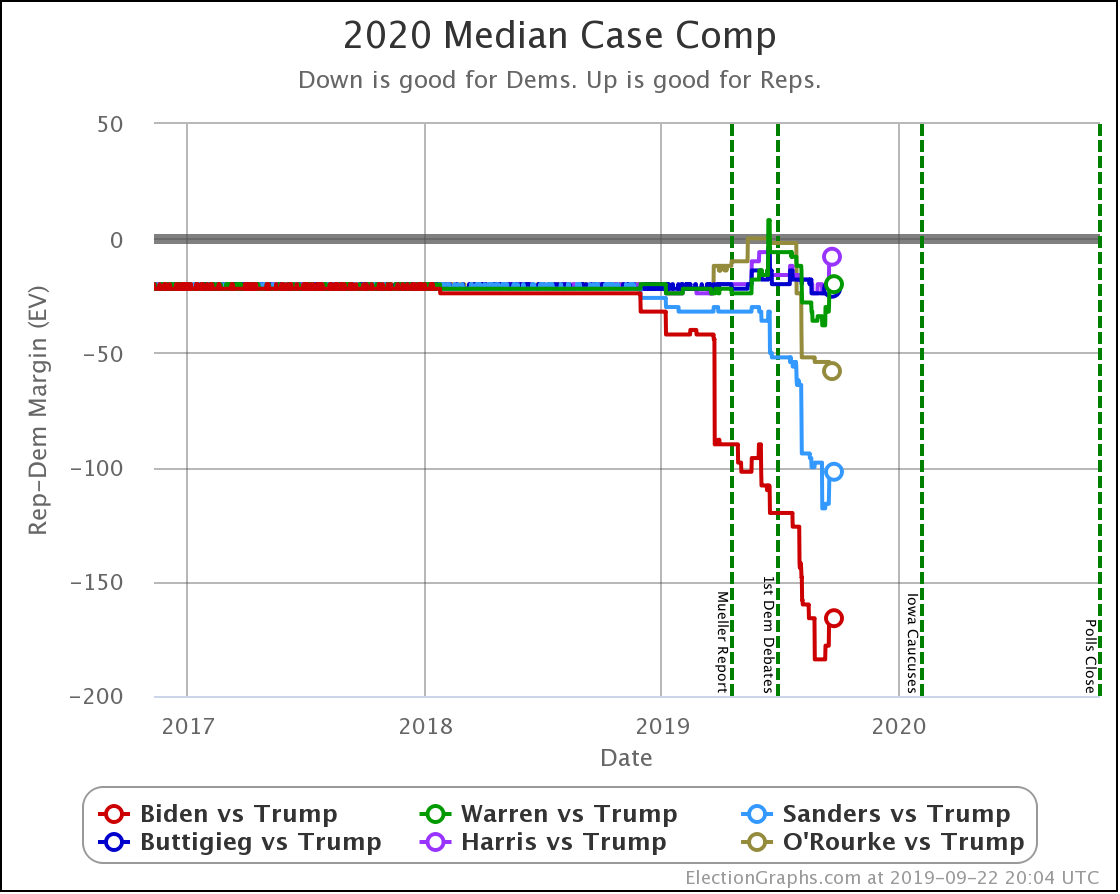 In this view, you can see that the winning margins of every  Democratic candidate except O'Rourke have been decreasing lately. Including Biden.

A lot of the "movement" of these various lines up until now could still be attributed to actual 2020 polling replacing old elections in our state polling averages. We are getting to the point though where a lot (although not all) of the critical states are mostly 2020 polls.

So we may start seeing trends that represent real changes in public opinion. We will also begin to see what level of variability is just inherent in looking at the election this way. It may end up being "normal" that some of these lines bounce up and down quite a bit as we go along.

In the meantime though, time to look at the trends in each of the states where there was new polling over the last week. There are a lot, so I'll be brief. 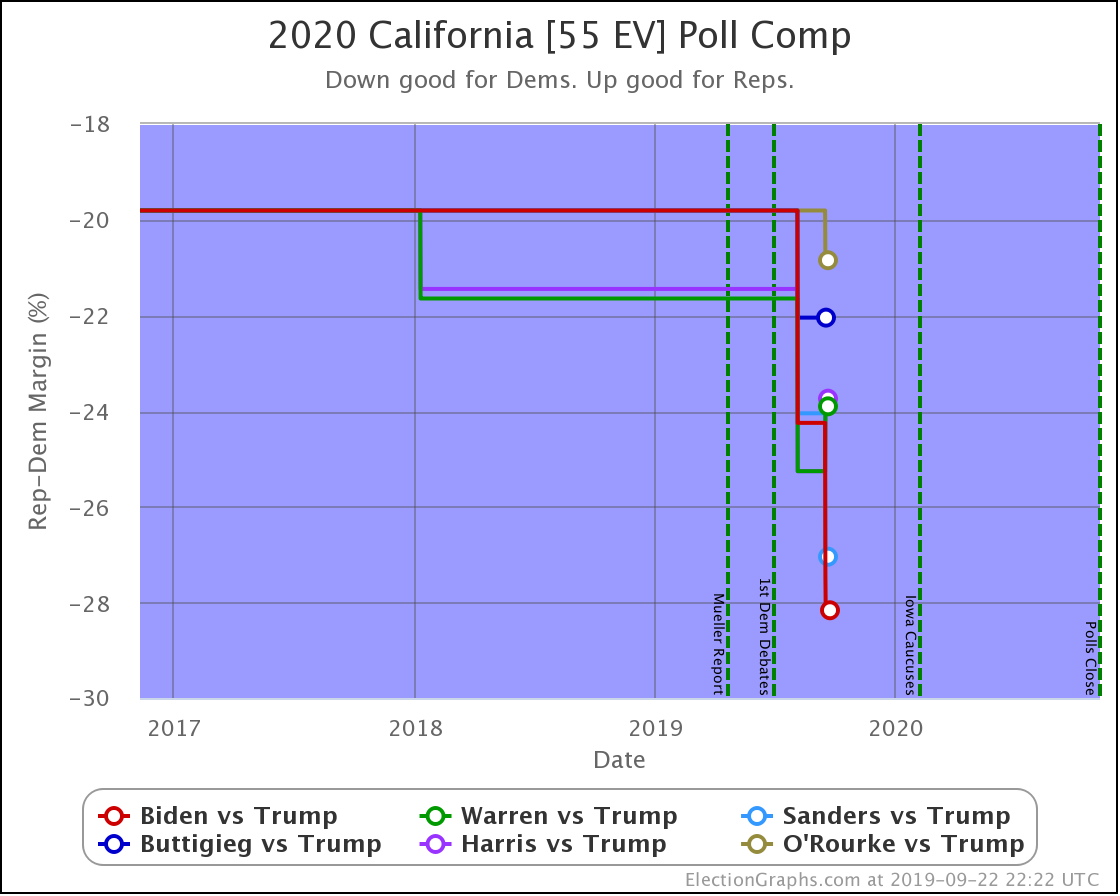 California is so blue; it is mostly irrelevant to the national race. All of the Democrats have a 100% chance of winning California. It is notable though that all six candidates are doing even stronger in California than the historical average from the 2000 to 2016 elections. California is getting even bluer. 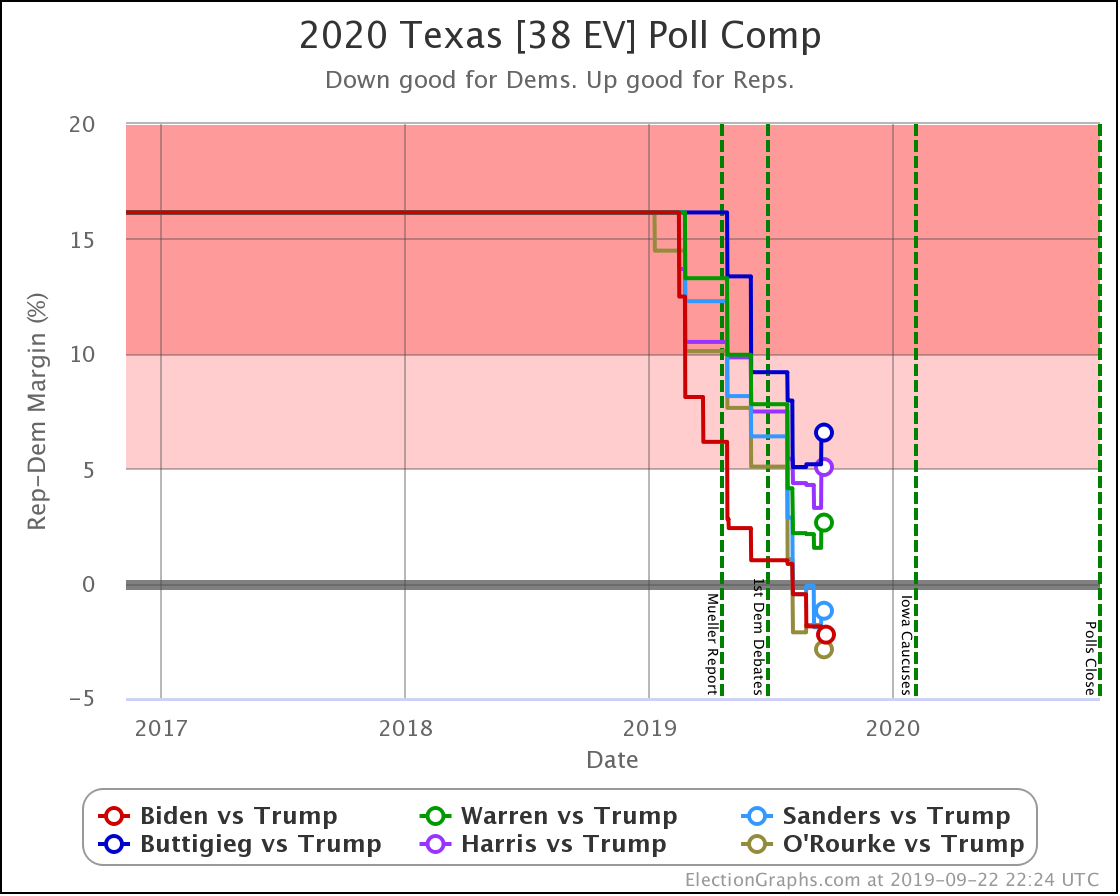 A lot of the win odds changes this week can be attributed to Texas. With the latest polling in Texas, the trend of each new poll moving the state further in the Democratic direction has ended. Biden and O'Rourke still improve slightly, but every other Democrat erodes. Along with Biden and O'Rourke, Sanders retains a lead. Warren, Harris, and Buttigieg not only lose Texas but the picture of them "making it close" is slipping. At least this week. 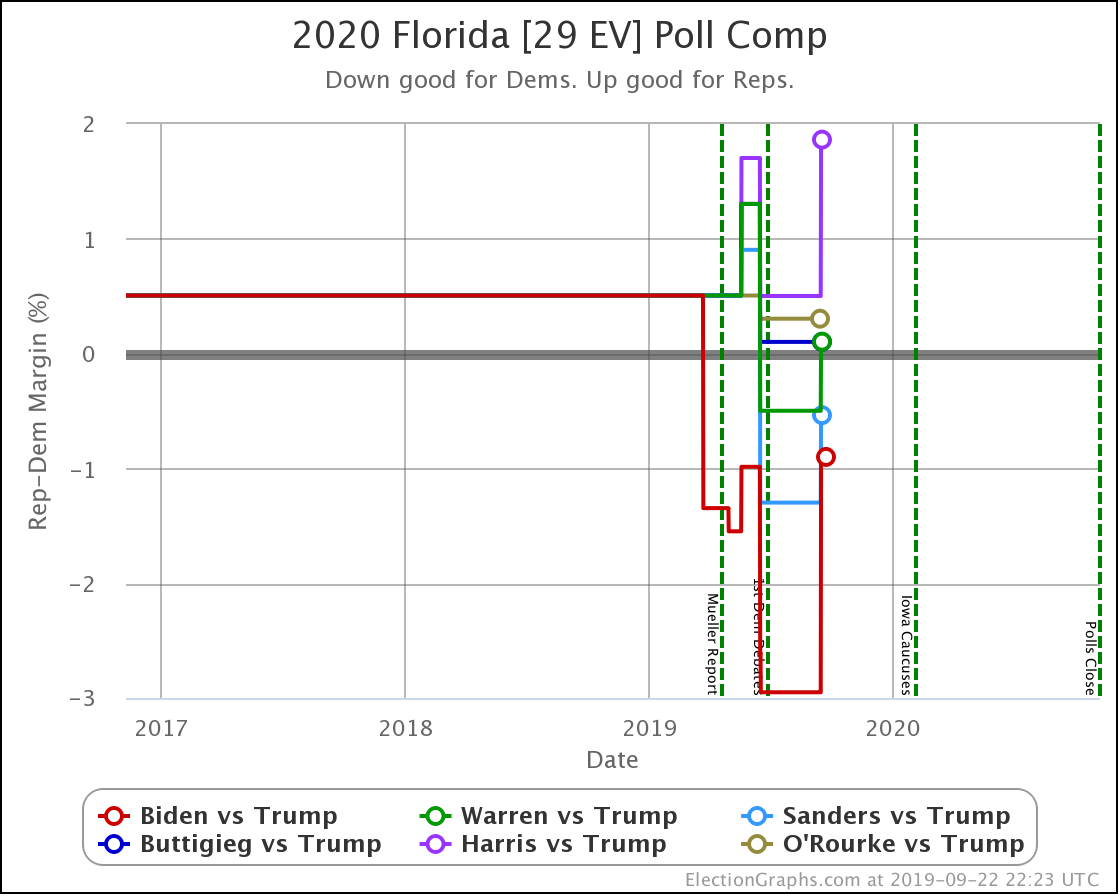 Florida is the other big state responsible for much of this week's changes. The only Democrats who did not weaken in Florida this week are the ones that were not in the polls. Florida has a lot of electoral votes, and Florida is close, so it has an outsized impact on the national picture. 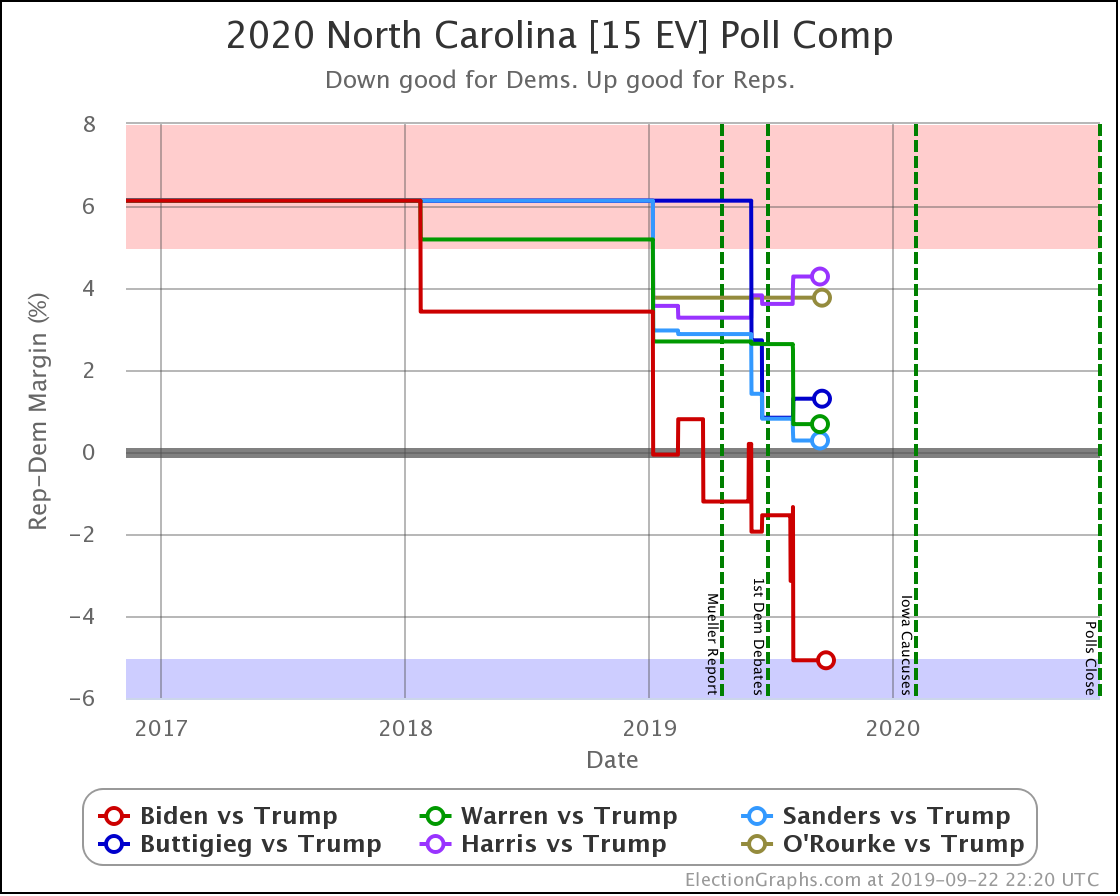 The only mover this week in North Carolina is Biden, with his average moving to a greater than 5% lead for the first time. Trump leads all the other Democrats by narrow margins. 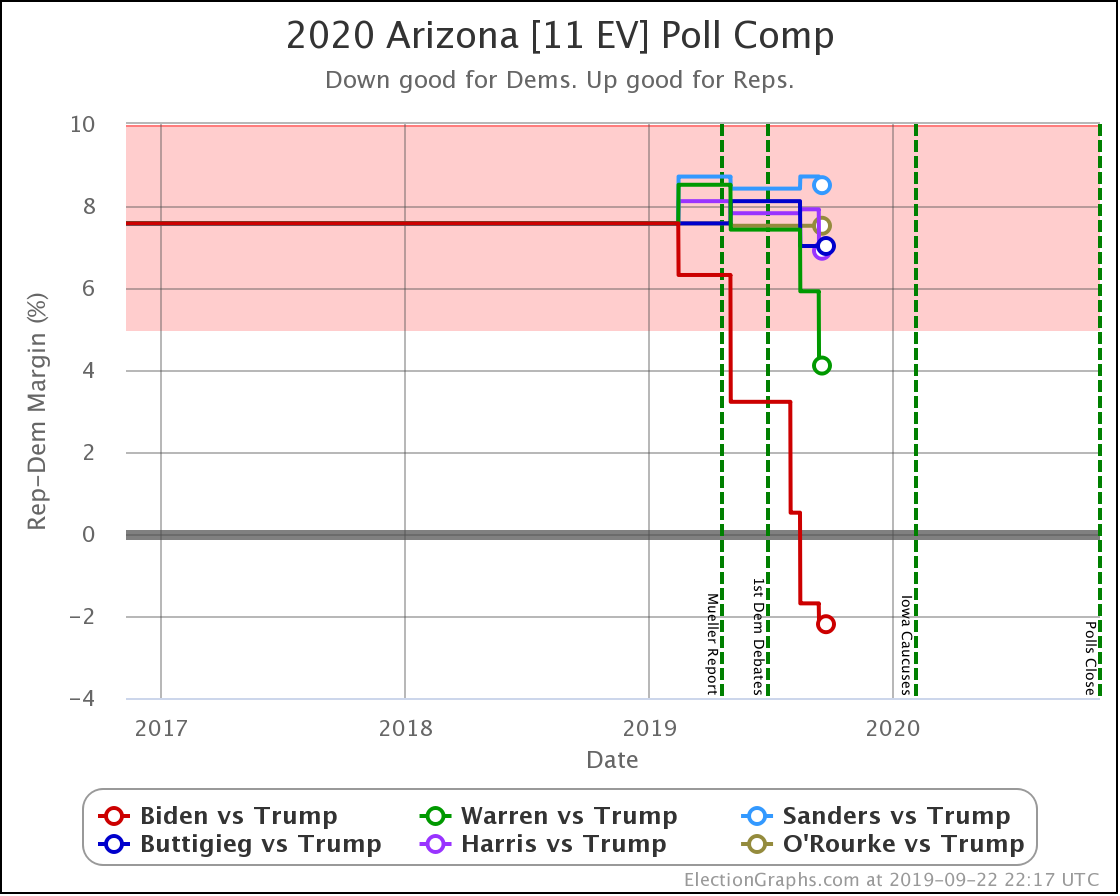 Arizona is another state where there is a big gap between Biden and the rest of the field. This week Biden took the lead in the Arizona poll average. Add Arizona to Texas as red states that flip, and you can see why Biden's national position remains so strong.  Sanders also makes Arizona close, but all of the other Democrats are hovering around the historical average, which is a Strong Republican win. 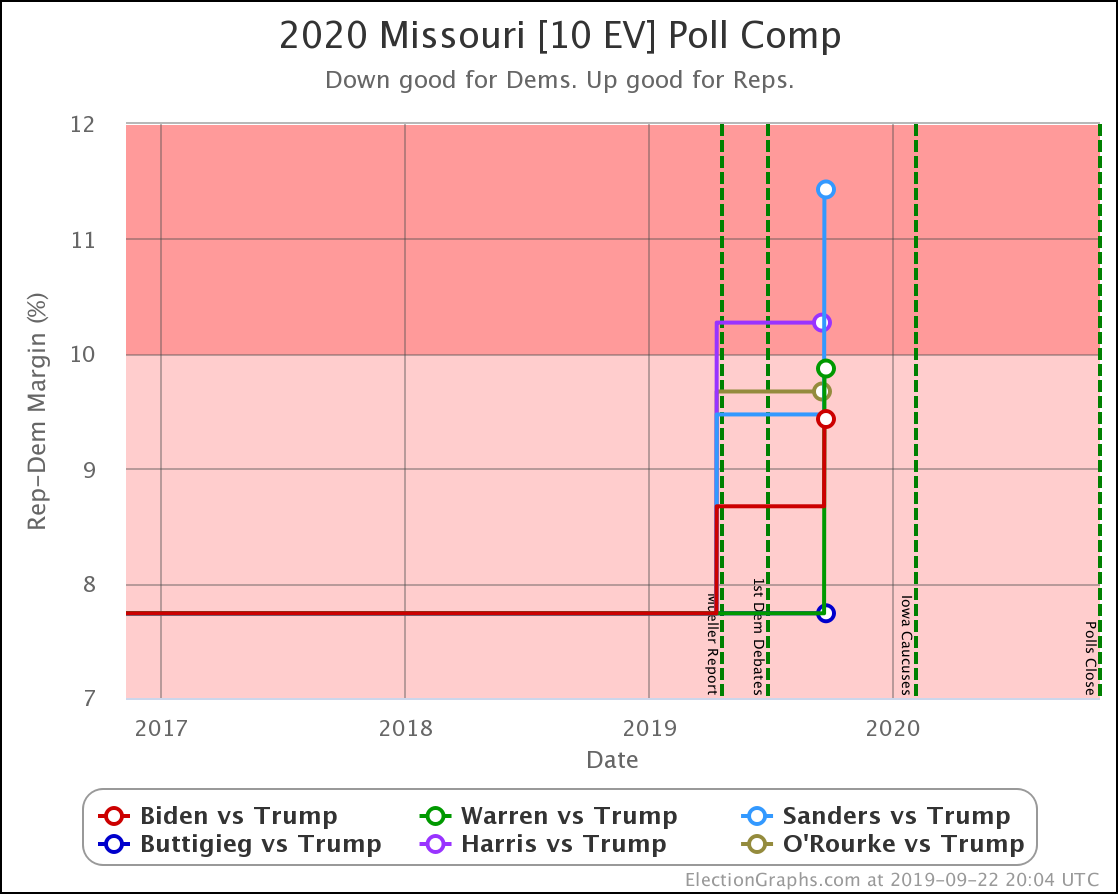 Missouri is clear red state, and with two polls so far this cycle, it just looks like it is getting redder. 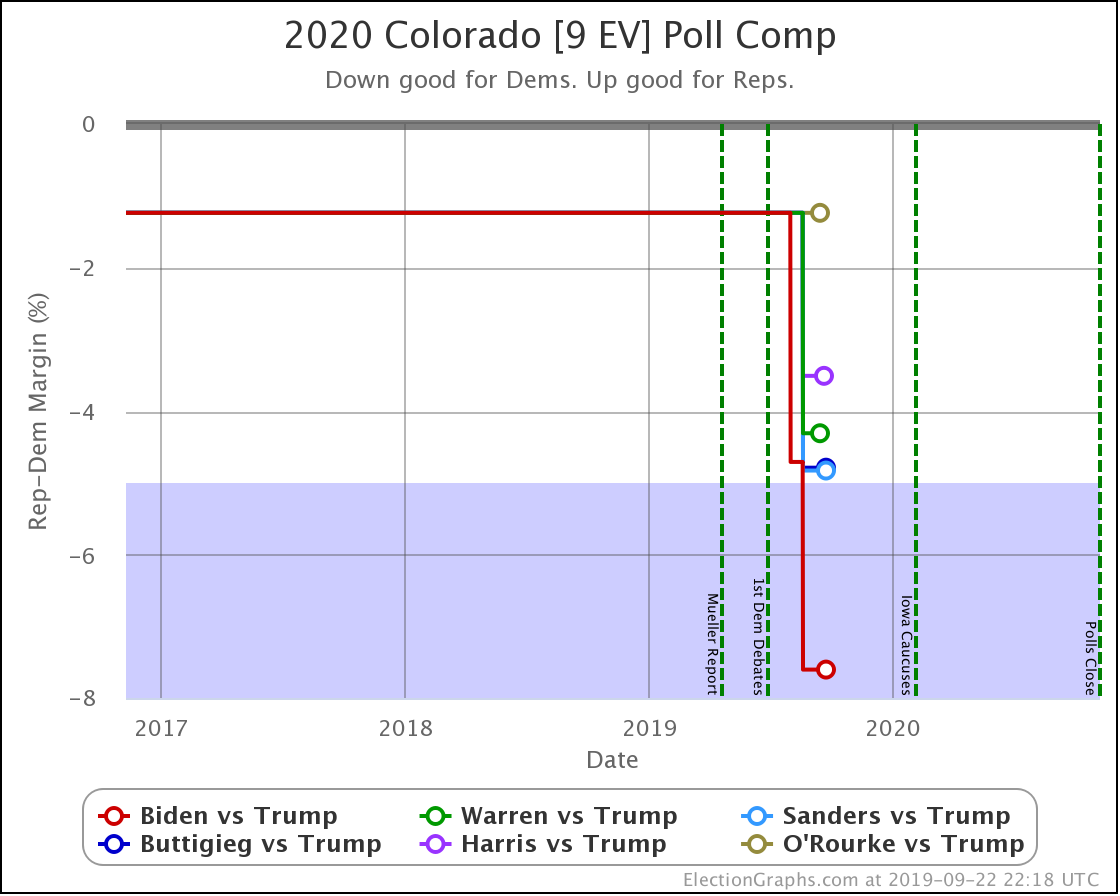 At the same time, Colorado is getting bluer. Only Biden moves the state into Strong Democrat territory so far though. The other candidates still only have narrow leads in the polling average. 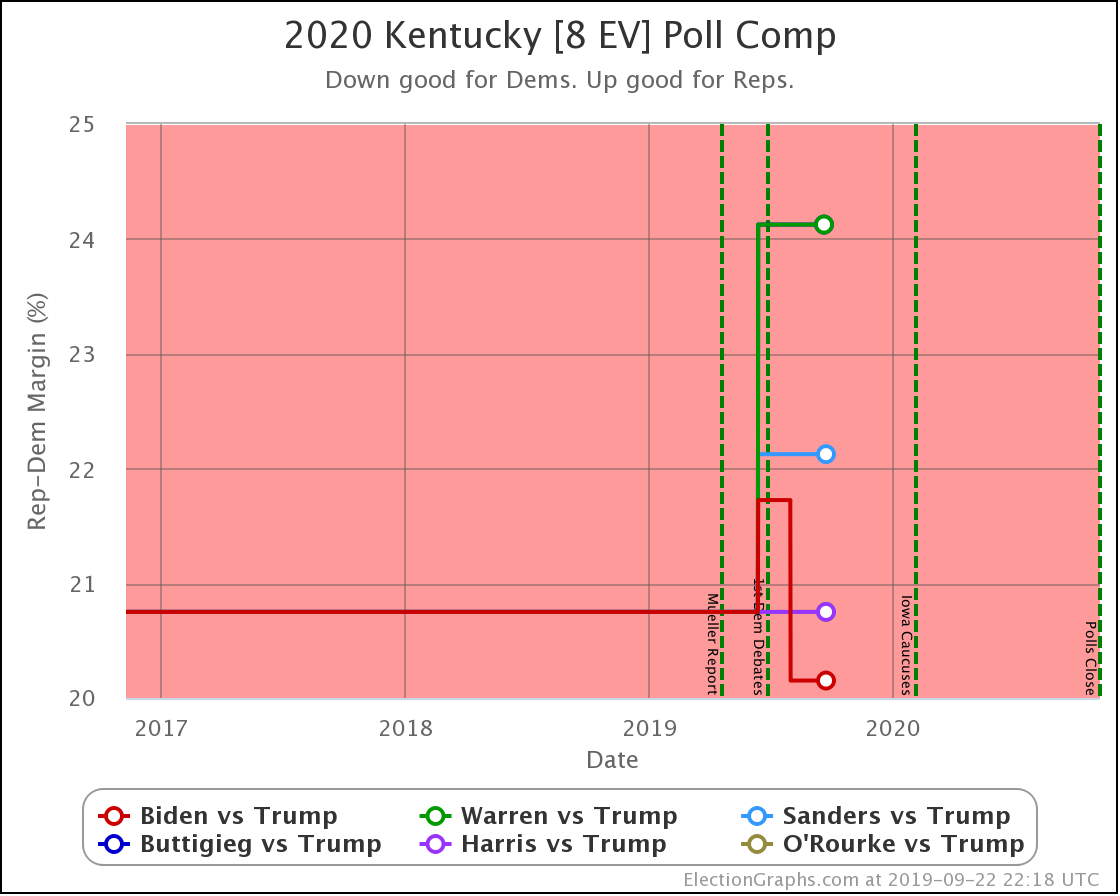 Kentucky is red and not in contention for 2020. With the small amount of polling so far though, Biden still does best, actually decreasing the Republican margin slightly. Not so much for the others. 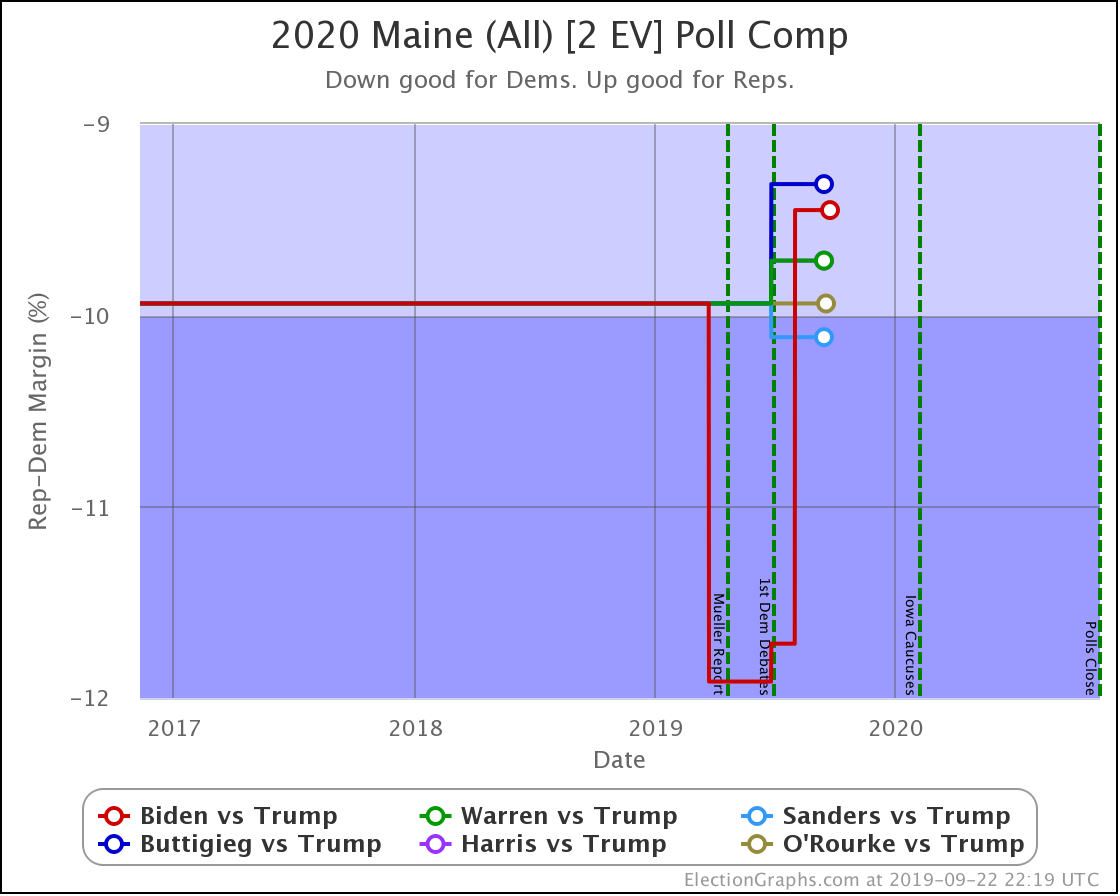 Finally Maine. Maine is blue and does not look to be changing into anything else. With the first few polls, Biden looked like he might be making it even bluer than before. But as we stand today, all of the Democrats are pretty close to the historical average for the state.

And that is where things are this week.

Since the last update, there have been new polls in Kentucky, Wisconsin, Michigan, Pennsylvania, Florida (x2), and North Carolina.

With this update, Buttigieg vs. Trump has now replaced Harris vs. Trump in the "five best-polled candidate combinations" that I'll spend time on in these posts. The new list is Biden, Warren, Buttigieg, Sanders, and O'Rourke all paired against Trump.

With this latest batch of polls, we have the following changes:

OK, now on to the graphs… national first: 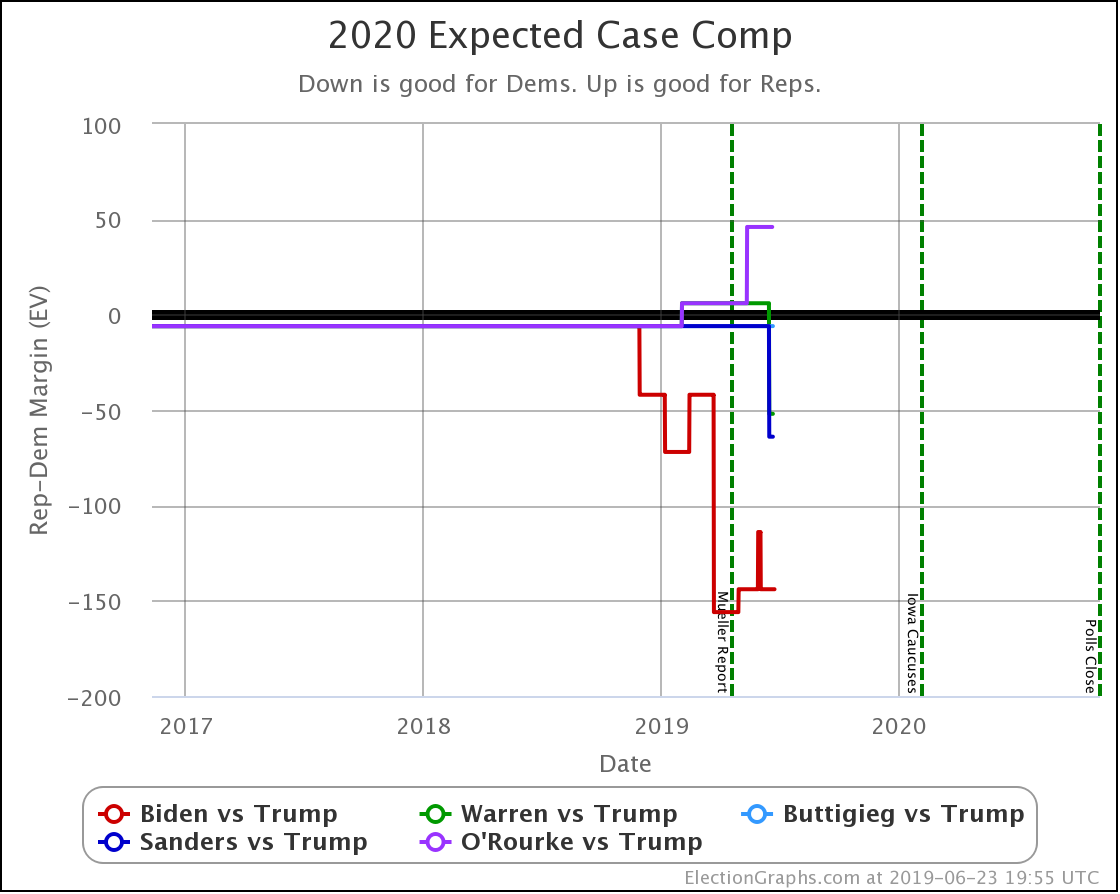 In the expected case, Warren and Sanders improve.

Notably, Warren moves from losing to winning with this update.

Biden continues to do the best of the five Democrats, while O'Rourke does worst. 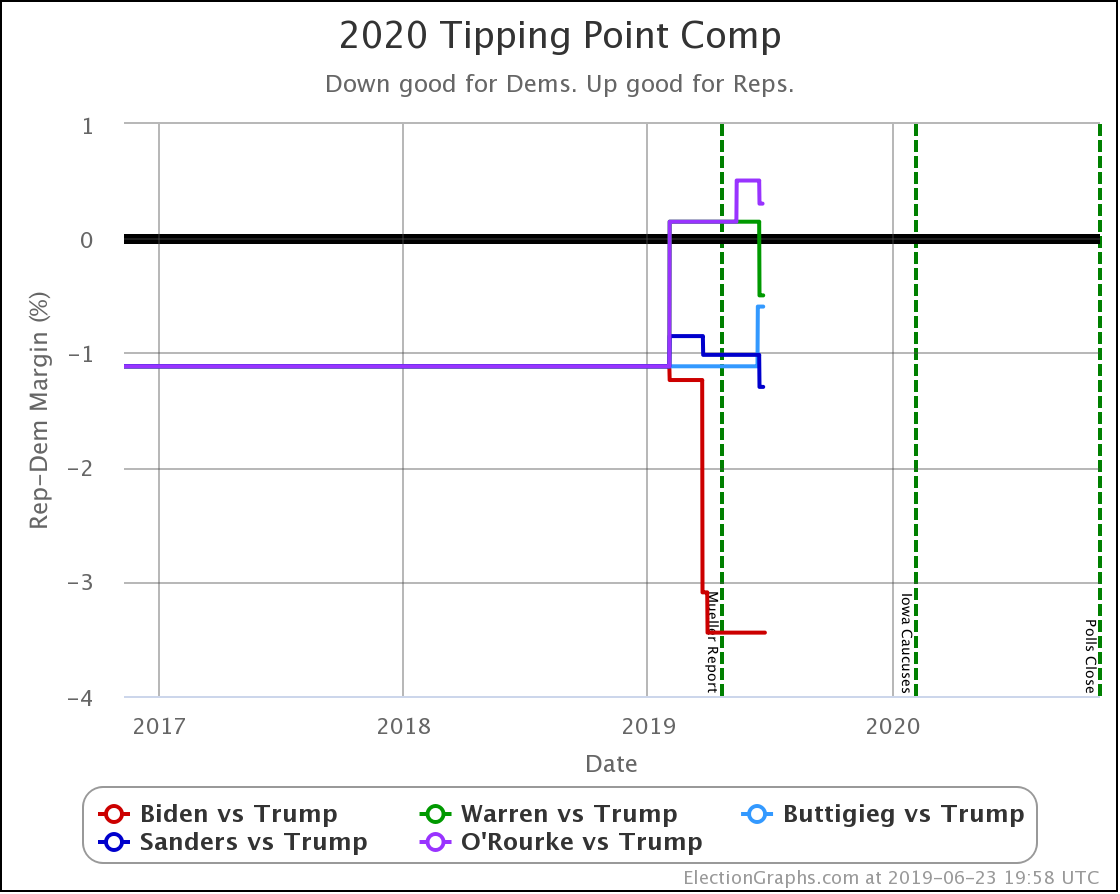 In the tipping point Warren, Sanders, and O'Rourke improve, while Buttigieg weakens.

Once again, you can see Warren crossing the center line to the winning side of the field.

And once again Biden does best, while O'Rourke does worst.

Now let's look at all of the states that had new polls in this batch: 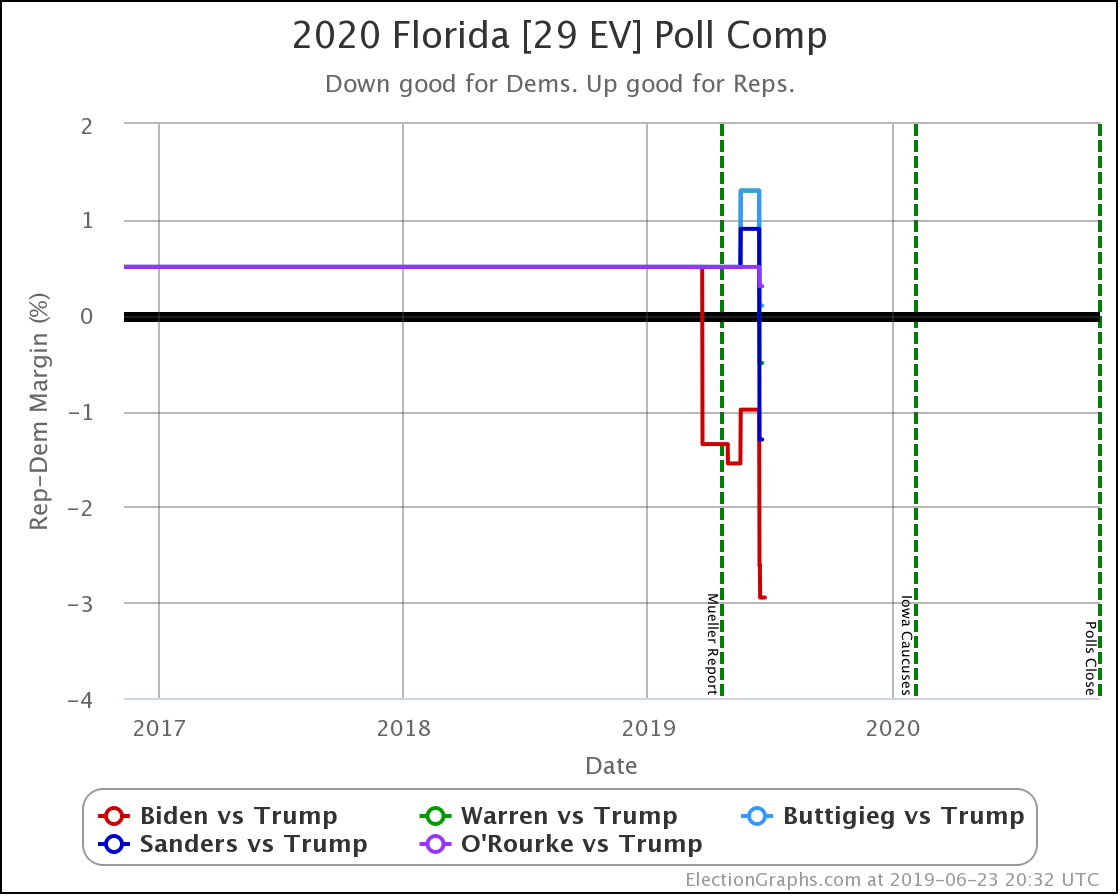 In Florida, O'Rourke and Buttigieg are losing to Trump. Biden, Warren, and Sanders are beating him. As usual, Biden is doing better than the other Democrats. But every single matchup here is close. As usual, Florida is a battleground state. 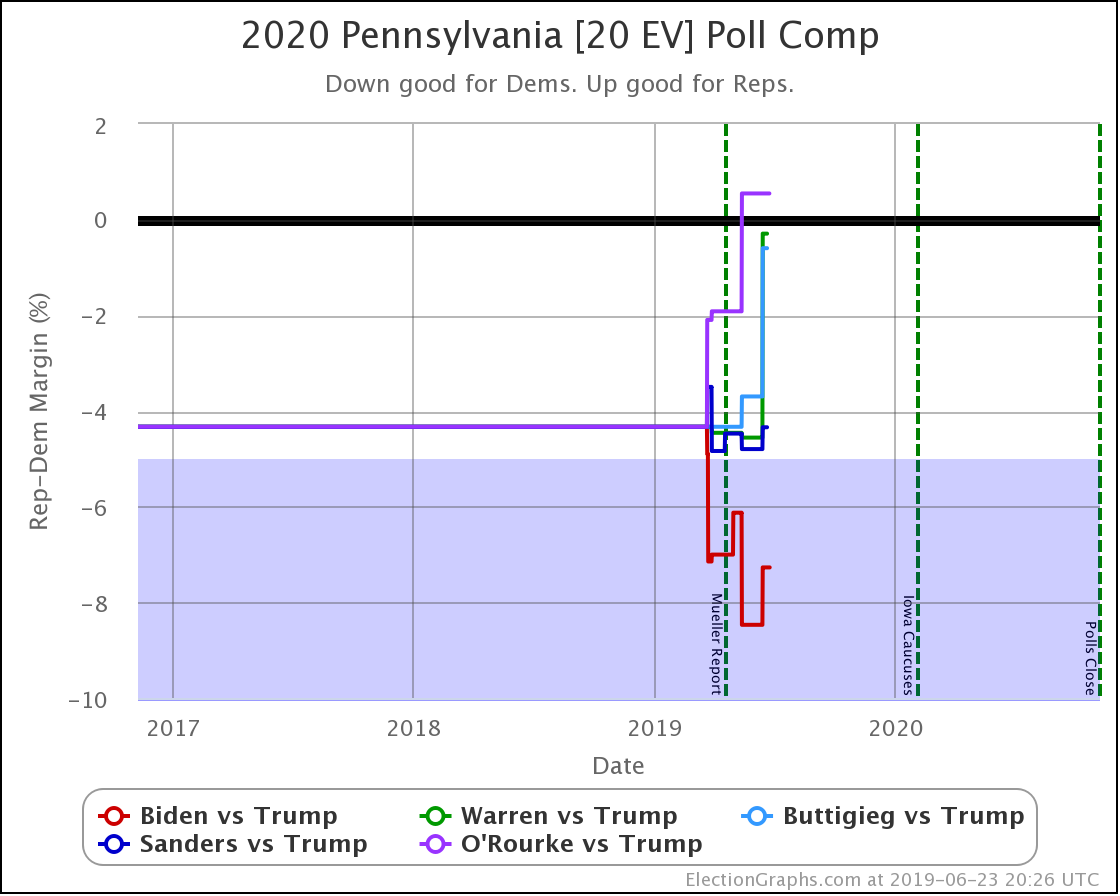 Biden has a healthy lead in Pennsylvania. O'Rourke is behind Trump. All the rest of these five Democrats are in the lead over Trump, but they have narrow edges. 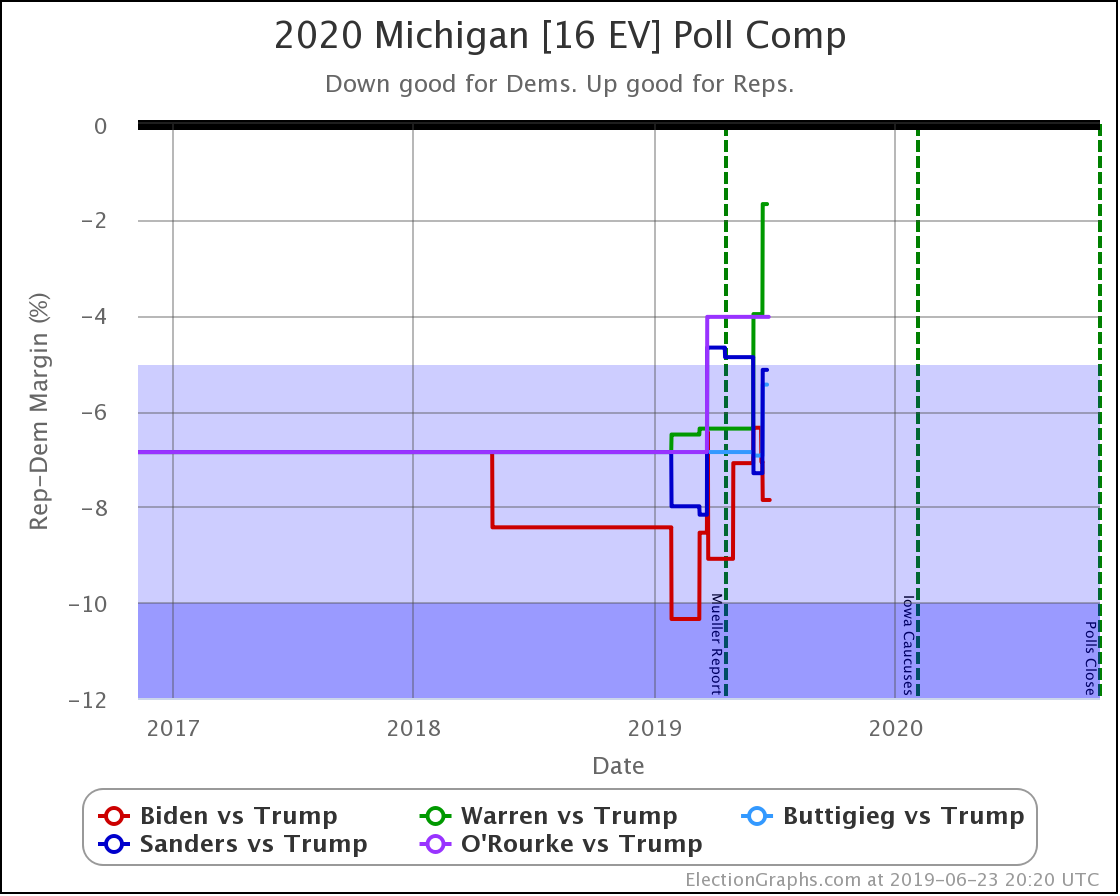 In Michigan, Biden is doing best. Warren is doing worst. Strong leads for Biden, Sanders, and Buttigieg. Warren and O'Rourke ahead by narrower margins. But all five leading Trump. 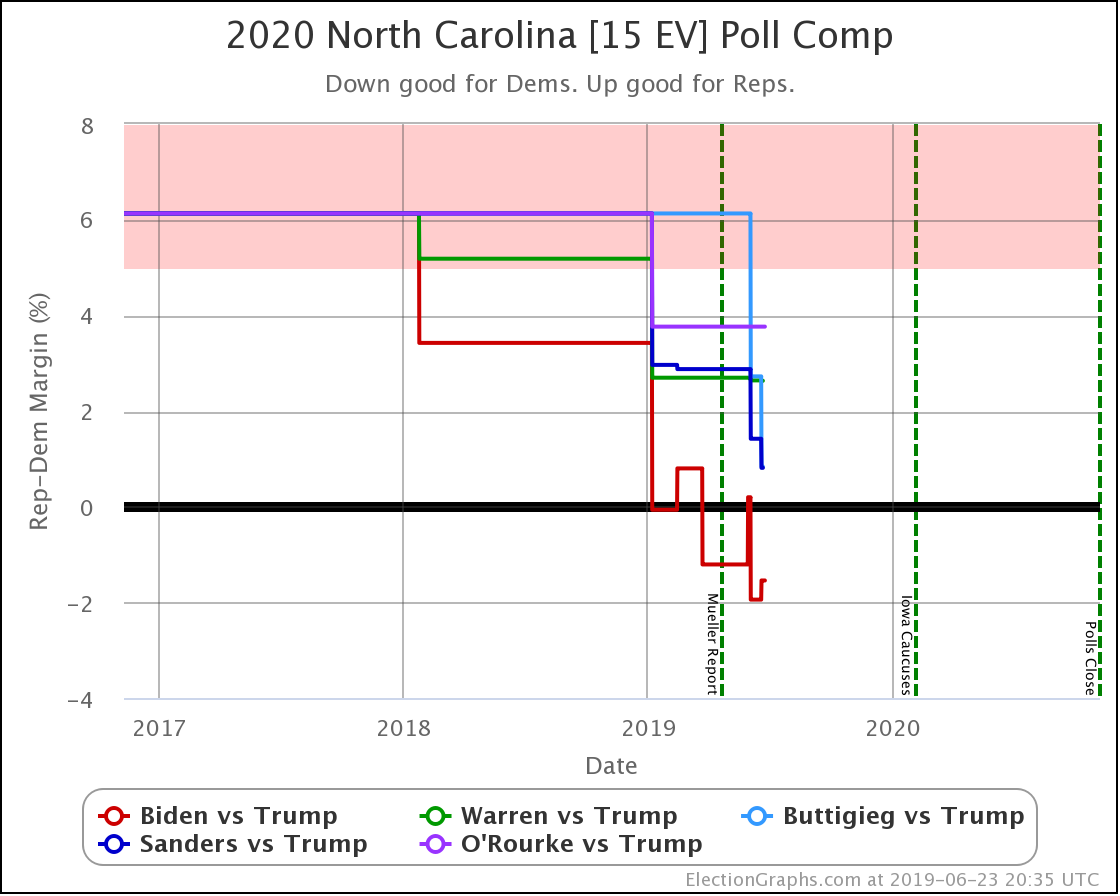 Biden is the only Democrat leading Trump in North Carolina. But all five would make it a close race. North Carolina is definitely in play at the moment. 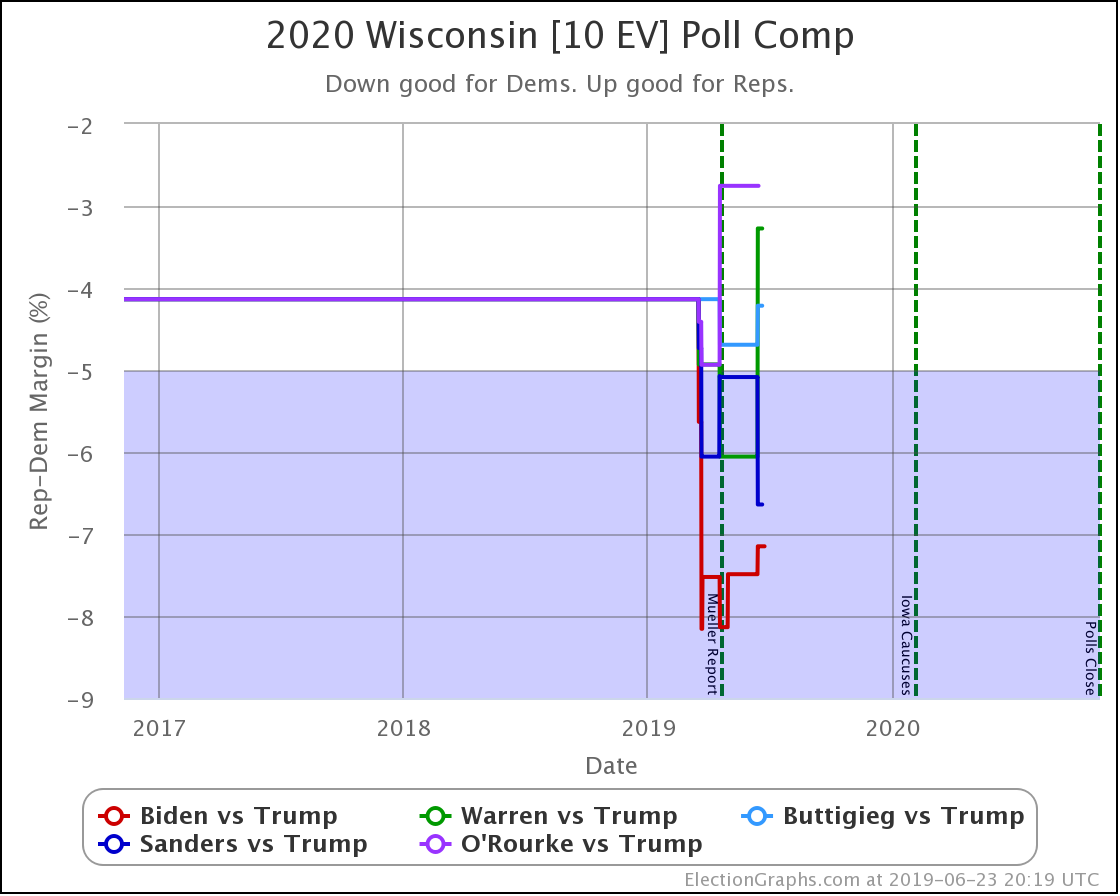 In Wisconsin, Biden is doing best, O'Rourke is doing worst. Biden and Sanders have strong leads. Buttigieg, Warren, and O'Rourke are only weakly ahead. But all five lead Trump. 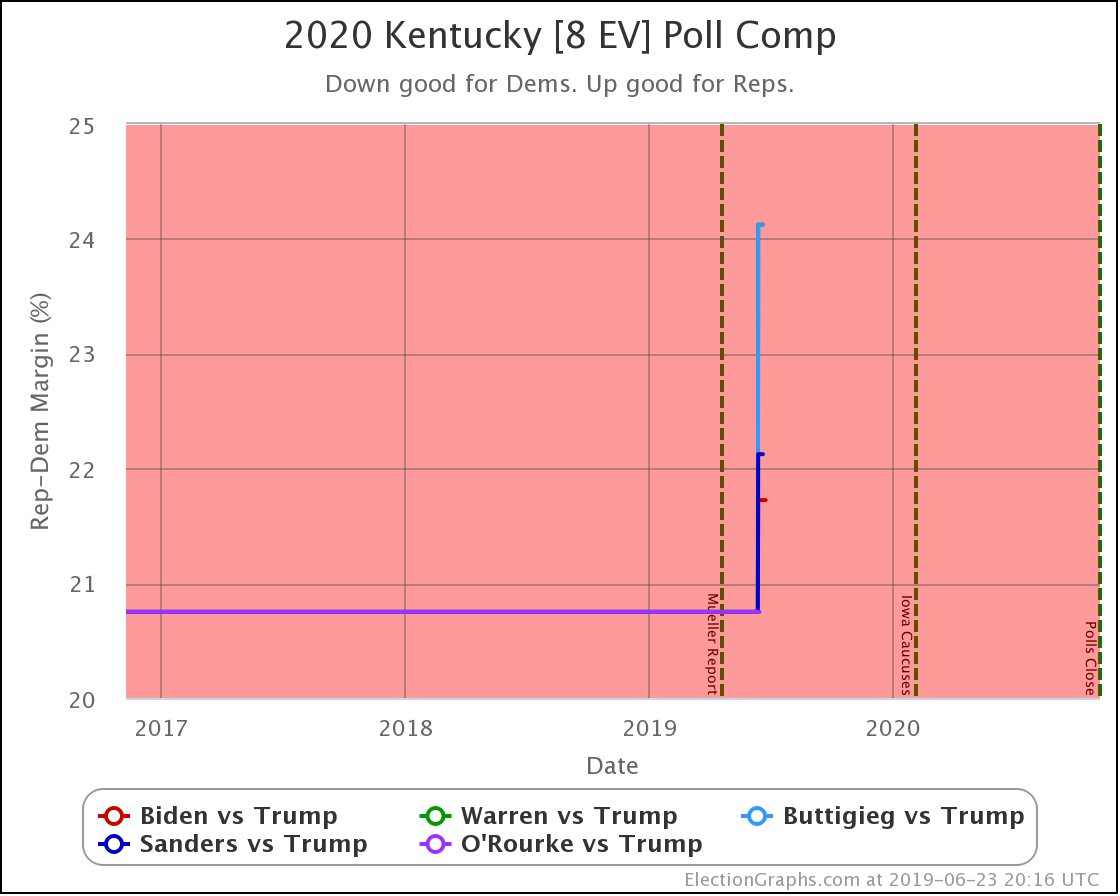 Kentucky is very very solidly red. With the very first Kentucky poll of the cycle, it looks like it may be even redder this time around than the average of the last five elections.

OK, finally, the odds based view of the national race. I haven't managed to make this view live on the site with graphs and all yet, but I'll at least provide updates here.

For those missing Harris, since she dropped off my top five, she's now at a 62.3% chance of winning.

It remains striking what a vast range there is between Biden on the one end of this spectrum and O'Rourke on the other.

As always, the caveat that things can and will change, but if the election was today, Biden looks about as close to a sure thing as you can get (much stronger than the median odds based view Clinton had, which was at about 86% on election day), while meanwhile, O'Rourke looks like a coin toss.

If this is primarily due to name recognition and the main deciding factor for voters is simply Trump vs. non-Trump, you should see the divergence between various Democrats reduce over the next few months as people get to know some of the lesser-known Democrats.

If on the other hand, these kinds of differences persist as we get closer to the Iowa caucuses, then there are lots of people out there where the choice of Democrat does indeed influence them on their final vote. In this case, "electability" becomes a valid criterion for Democrats to consider when making their choices in the primaries and caucuses.

3.1 days until the first Democratic debate.