Also, since the last update, Sanders dropped out. As I mentioned in that post, that is my trigger for all future updates to simply be about the presumptive nominees, Biden and Trump.

I will allow myself one final note about Sanders. There were a handful of polls on Sanders vs. Trump after the last post. They just continued to make things worse for Sanders. Unless something strange happens, there will be no more Sanders vs. Trump polls.

His final position in the Election Graphs categorization model "expected case" was a four electoral vote loss to Trump with a 1.1% tipping point margin.

So that's that for Sanders.

Things have gotten worse for Biden too.

Let's start with a new table comparing where we were at the last blog post compared to today:

There are a lot of numbers there. When we were comparing candidates, we were only looking at four of these.

The additions here are:

Including both the old metrics and the new ones, this time around all but one (Trump's best case in the categorization view) move toward Trump.

Time for some graphs. 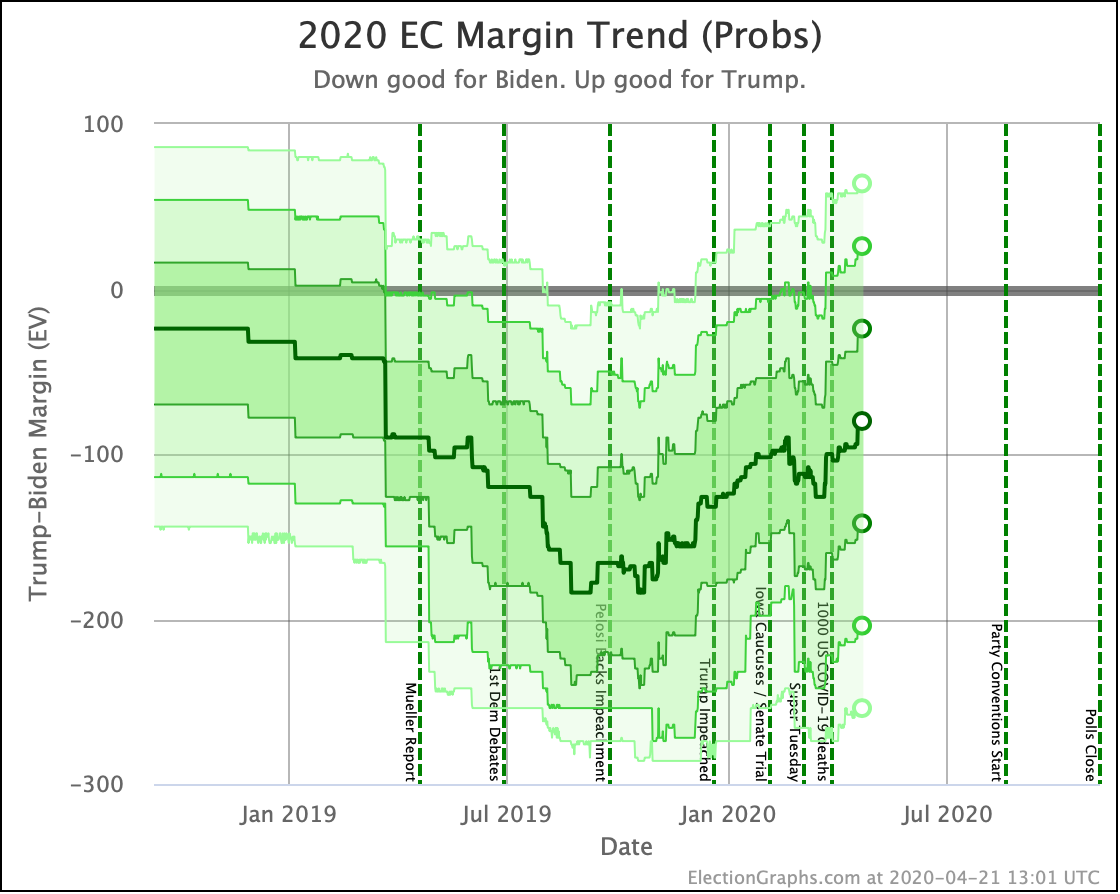 From mid-February to mid-March things were moving in Biden's direction for the first time in many months. But then that reversed and things started moving in Trump's direction again. This does seem to roughly coincide with when the COVID-19 pandemic really started to dominate public discussion. So perhaps this is a "crisis bump".

Whatever the cause, Trump is in his best position relative to Biden in over a year. 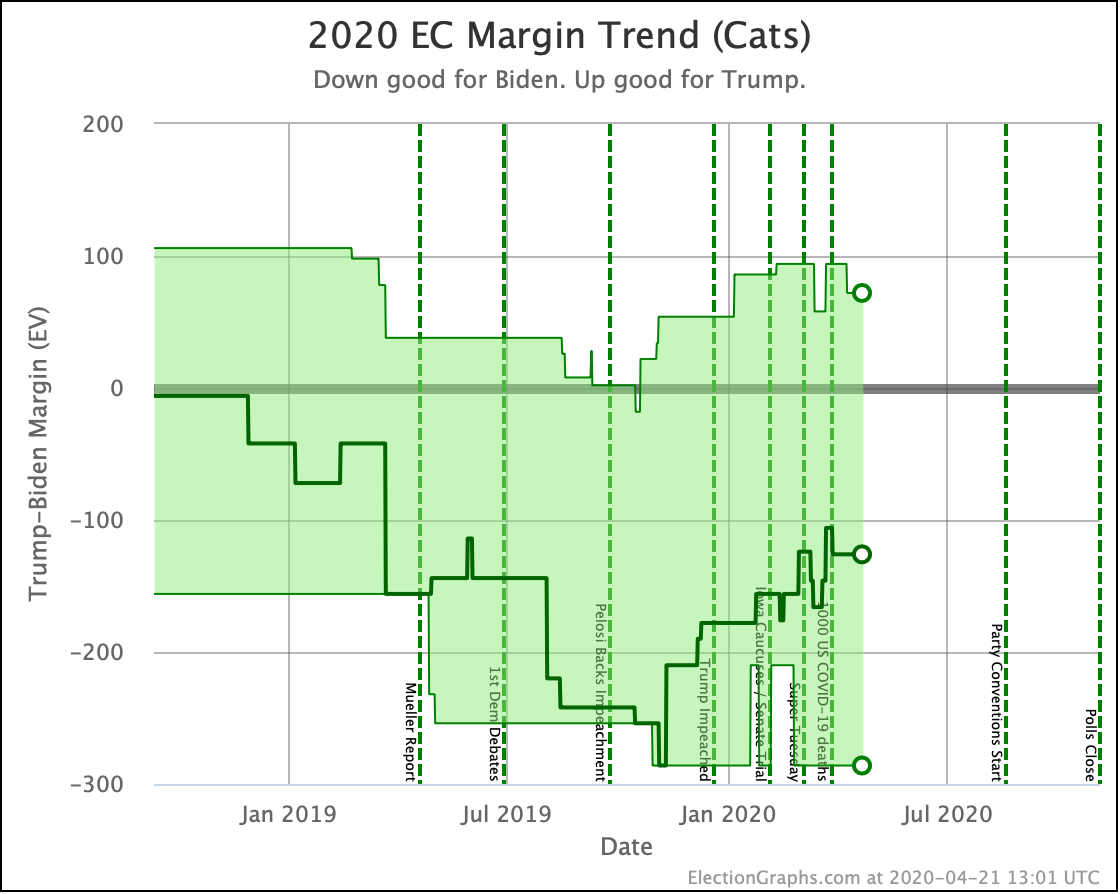 This move toward Trump in the last month is not as evident in the categorization view. Why?

Well, because most of the movement in the polls hasn't actually shifted the averages in states from Biden to Trump.

However, the margins in a lot of the "Weak Biden" states got slimmer. Biden still leads, but not by as much as he used to. This means the chances of Trump winning those states despite the Biden lead in the poll average increases. This is reflected in the probabilistic model, but not in the categorization model. 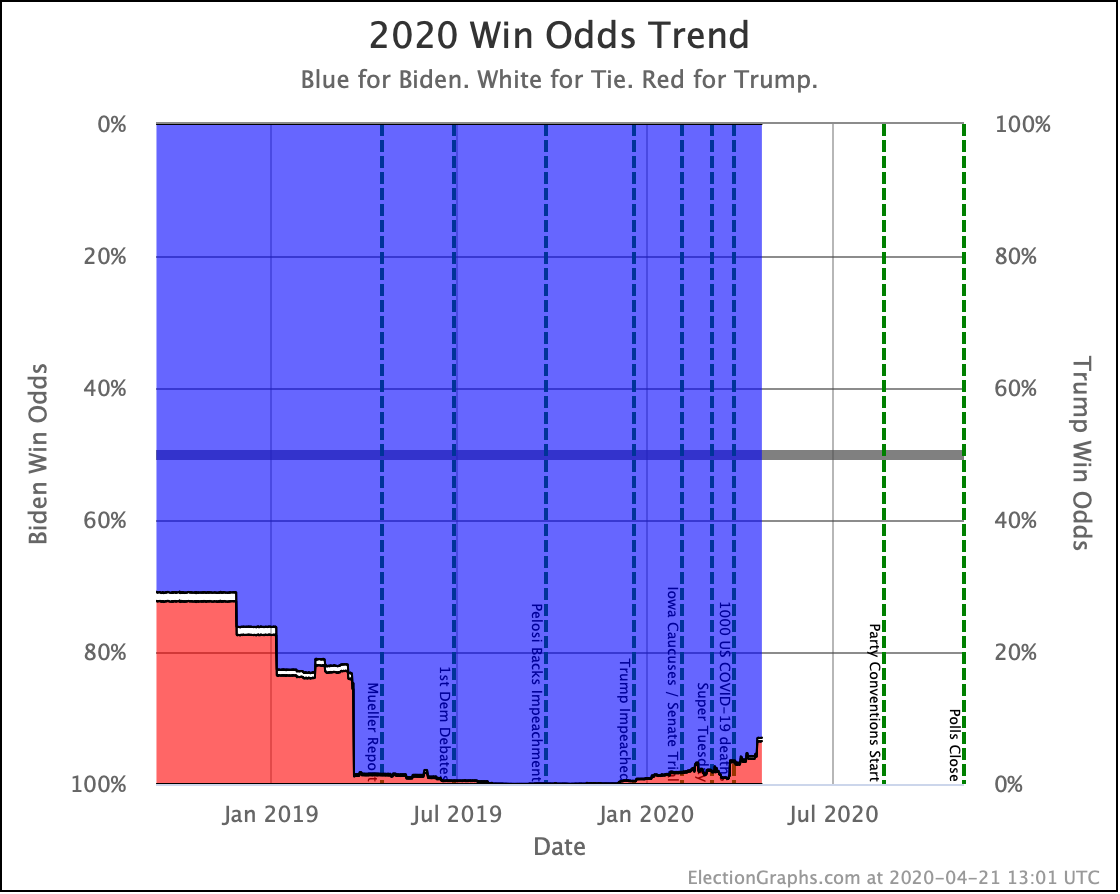 If the election was today, Biden still has a huge advantage. 93.0% chance of a win. Not anywhere near as good as he was last fall with 99.9%+ numbers of course, but still pretty respectable. 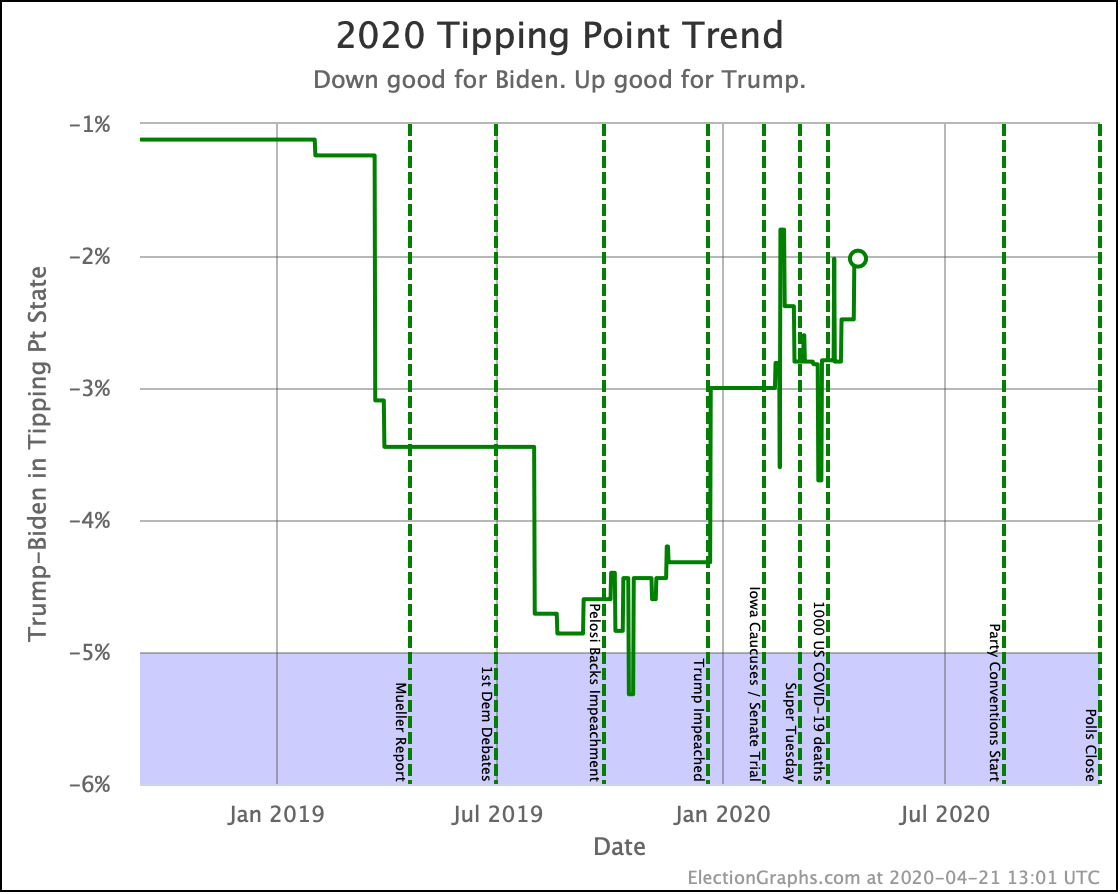 As I've mentioned over and over again and will continue to mention, probably right up until the election, the odds are based on the state level polls today, which can and will change. And they can change quickly.

The tipping point tells us that overall the polls only need to shift by 2.0% to flip the winner from Biden to Trump. It is hard to express just how slim a 2.0% lead really is. Yes, if the polls were like this on election day, we'd say Biden had a 93.0% chance of winning. But 2.0% can slip away with one bad news cycle.

Even on the chart above, without having to refer back to 2016 or earlier cycles, you can see places where the tipping point moved by almost 2% in just a single day.

With that, here is the current map: 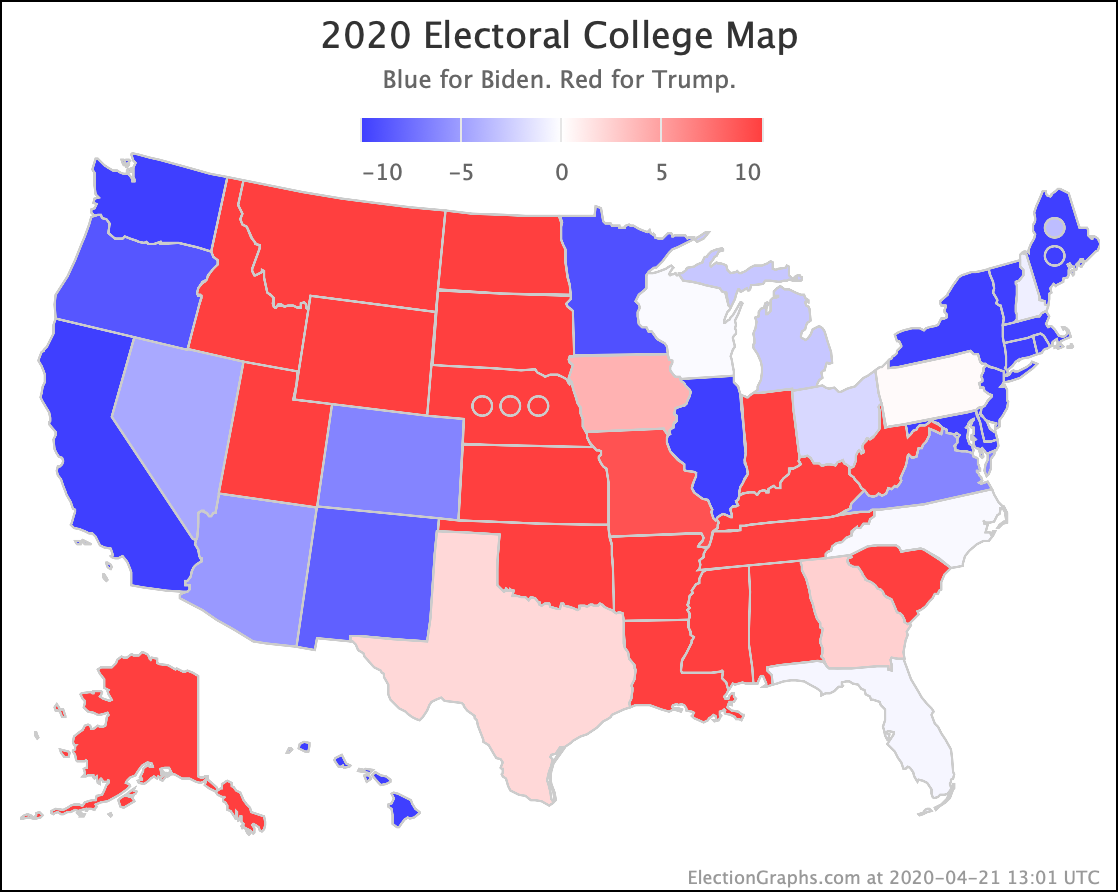 195.2 days until polls start to close on election night.

Update 2020-04-22 19:09 UTC: Of course a new Florida poll came out while I was finishing up this blog post. It was a good poll for Biden, and Florida is big and close, so it improved Biden's position a bit. Of course, that now belongs to the time period that will be covered by my next post in a week or two…

Most attention in the just over three weeks since that post has been on the coronavirus pandemic rather than electoral politics, so doing an update here sort of fell a bit on the to-do list. But since the back and forth with executive actions and court battles finished, and there actually is a primary in Wisconsin with in-person voting happening today, it is a good time for an update.

Before I start, some housekeeping. I am very tempted at this point to simply report on Biden vs. Trump. As discussed in the last update on the Democratic nomination, at this point, a Sanders comeback to win the nomination would require something catastrophic. Something of the magnitude of Biden having to drop out due to health reasons. There is no realistic path based only on Sanders doing an excellent job making his case. Biden would have to implode in some substantial way.

However, I've decided to continue to report here on the comparisons between Biden vs. Trump and Sanders vs. Trump as long as the following are all true:

So we'll keep looking at Sanders vs. Trump too, at least for the moment.

With all of that said, the last three weeks have not been kind to the Democrats, but they have been especially bad to Sanders.

It looks like a lot of close states moved toward Trump. This is potentially a "crisis bump" where folks rally around the leader during a traumatic national incident. The pandemic certainly qualifies as that sort of event.

In Sander's case, there may also simply be movement because, with his losses in the Democratic primary, he is not perceived as being as strong as he was before. And he was weaker to begin with.

Let's take a look at our four main metrics and see how things look: 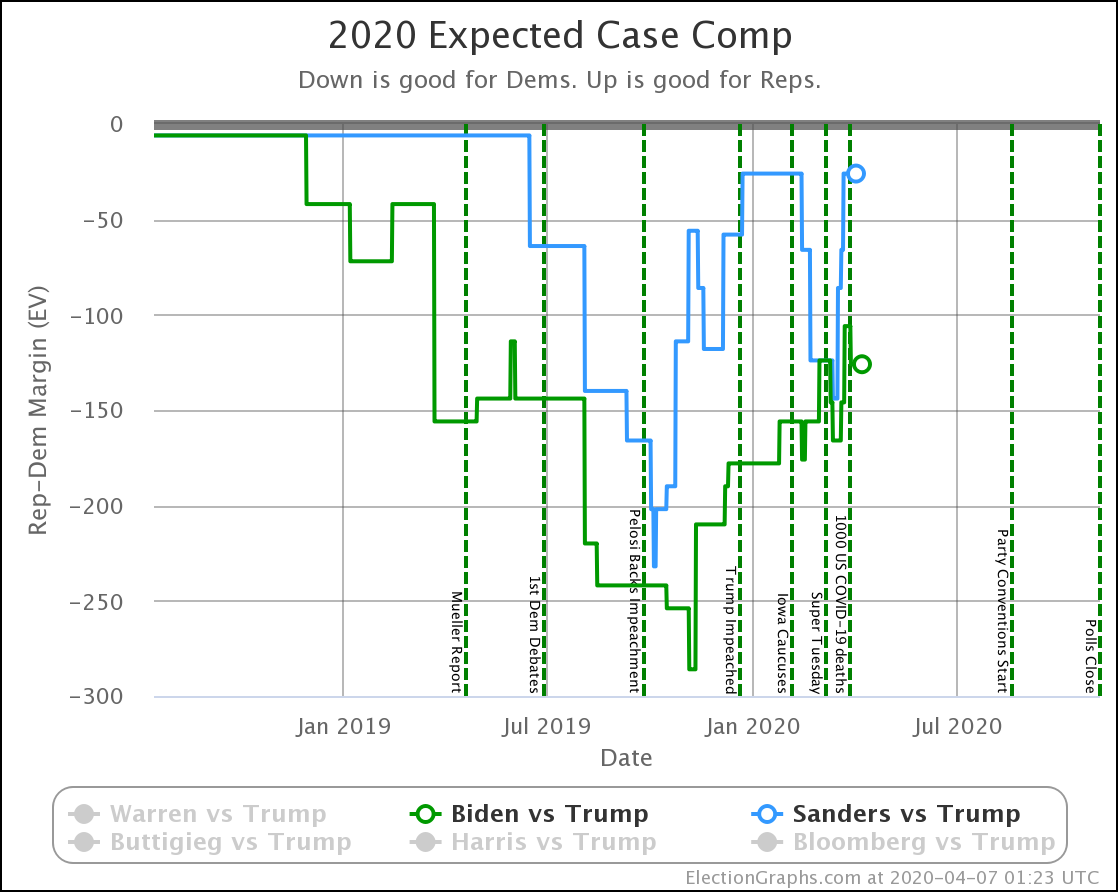 Starting with just the expected case, if everybody wins all the states where they lead in the Election Graphs average, we see that both Democrats have lost a lot of ground.

Sanders also lost his small lead in Pennsylvania. But in addition, he lost his leads in Florida (29 EV) and Wisconsin (10 EV). So that's an additional 78 electoral votes of margin lost for a total of 118 EV of margin lost.

Biden started with a bigger lead as well. So this view now has Biden leading Trump by 126 electoral votes, while Sanders's lead is now a very narrow 26 electoral votes. Still ahead, but suddenly a very close race.

Just from a handful of states slipping just a little bit. 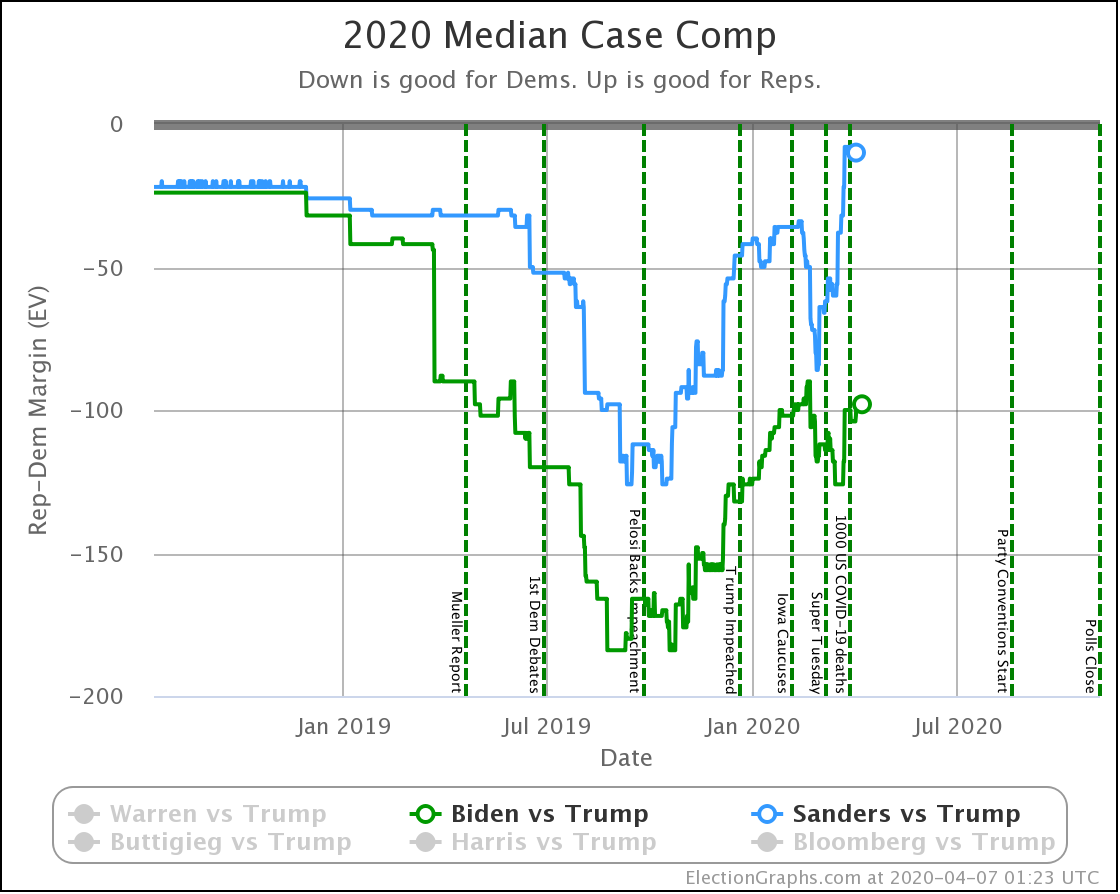 Because there are so many states that were just barely on the Democratic side of the line, the median cases in the probabilistic view are both narrower than the more naive view. This is because it would be very easy for those states to go the other direction.

The impact from the polls these last three weeks is similarly a bit smaller. But directionally the same. Weakening for both Democrats, with a bigger fall for Sanders.

And the median case for Sanders is now very close indeed. Still winning, but only by a very slim electoral vote margin. 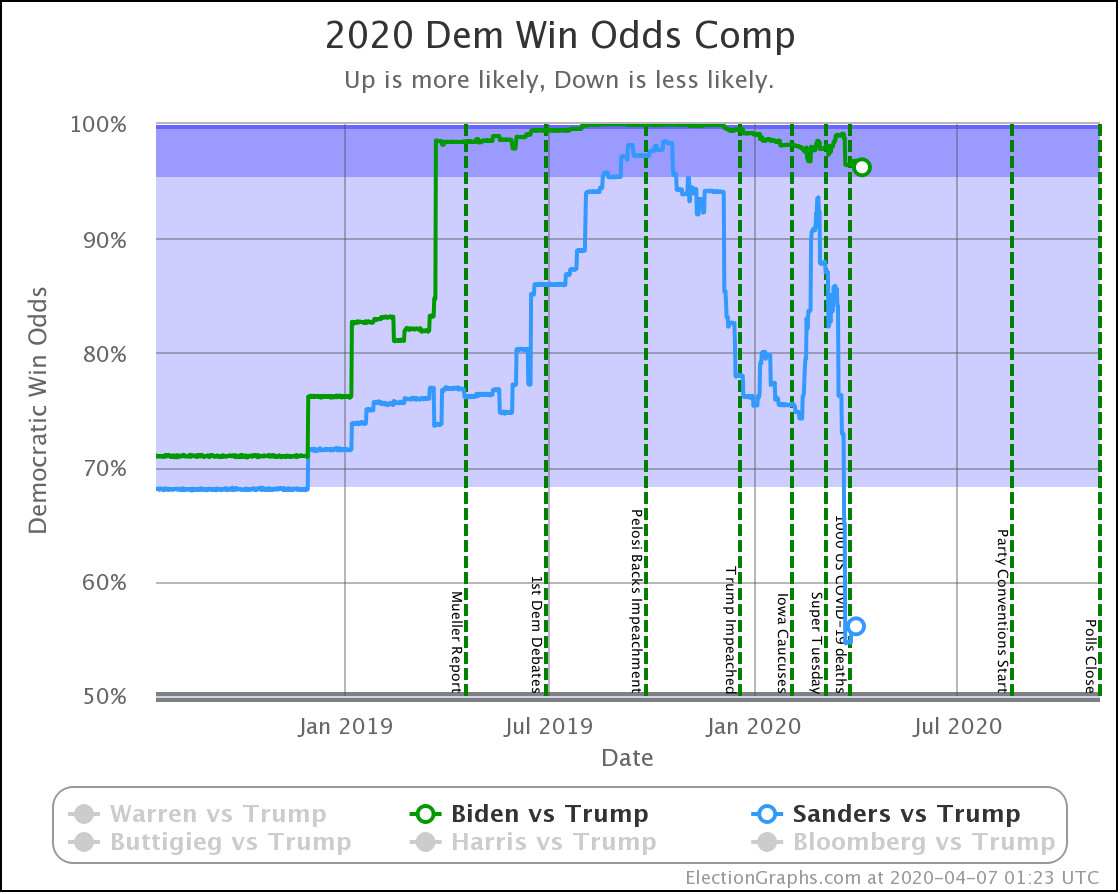 In terms of the odds of winning, the impact is much more dramatic. Sanders moves from a position that wasn't quite as strong as Biden, but still very respectable, to being barely a better bet than a coin toss.

While Biden drops a bit as well, to his worst position in over a year, the change for Sanders is a very large drop in a very short time to his worst performance since 2020 polling began. It is a stunningly large drop.

Remember, everything presented here is "if the election is held today." It shows the odds based on the historical accuracy of the Election Graphs averages as they stand when the election happens. So, for instance, right now Biden leads Florida by 2.5%. That translates into a 69.8% chance of Biden winning the state…  if Biden's lead remains 2.5%.

These odds do not take into account the chances of the lead in the state changing over time. We provide a snapshot in time, not a projection into the future.

If there are enough close states, then small moves in those states can make a big difference quickly. 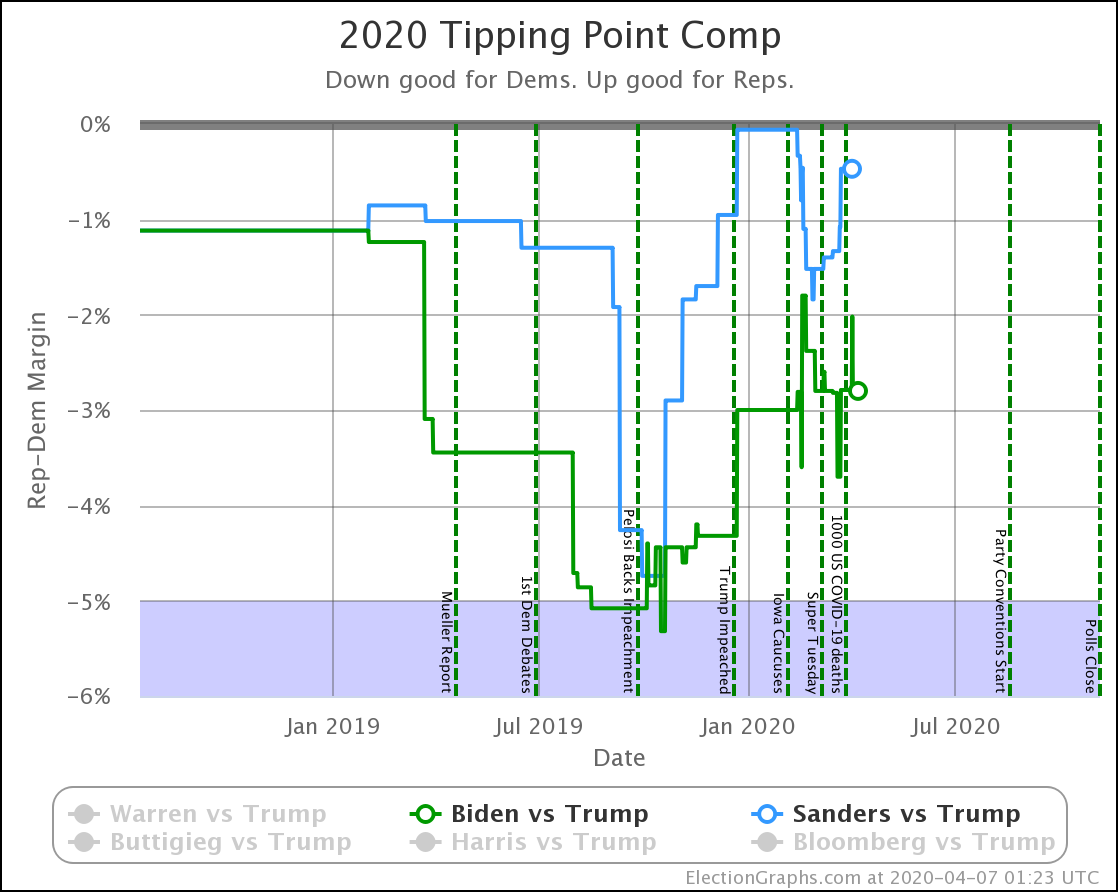 The tipping point is the metric we use to understand how big a change it would take to flip the winner.

Three weeks ago Sanders's tipping point was only 1.4%. So a very small shift in the critical states would be enough to put Trump in the lead nationally. The last three weeks provided more than half of that shift.

Sanders now teeters on the edge of losing his overall lead to Trump. Sanders winning against Trump now relies on an incredibly slim 0.5% lead in the poll average in Ohio. A tiny movement in one state would result in a Trump win.

So what about Biden's 96.2% chance of winning? How secure is that? 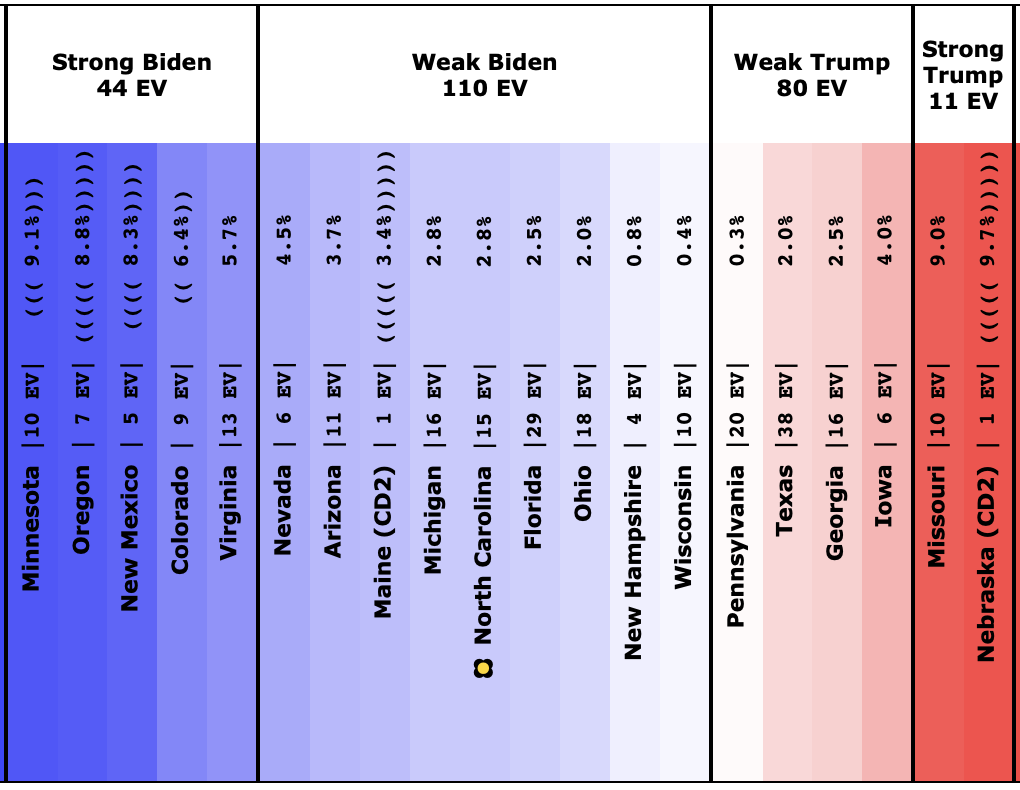 Looking at the specific states, it is not just one state that has to flip like the Sanders case. Instead, five states have to flip to the Trump side to change the winner. Which seems like a lot.

But the margins are really small. All of these states are super close. Biden leads, but barely. If the polls were like this on election day, Biden would very likely win. That's what the 96.2% represents.

But there is a long way to go between now and election day.