There were new polls in Florida since the last update, but they didn't result in any category changes for the state, so instead I'll talk about some new features I added to the site a few days ago.

Now, to be clear, since this analysis compares the FINAL average before the election to the election results… it did not look at how those averages varied over time in the leadup to the election… this is looking at the odds "if the election was today." There is no factoring in the likelihood of changes over those intervening months as some more complicated models might.

But it still gives a snapshot I think is interesting, and EVERYTHING on Election Graphs is "if the election was today," so it fits in well.

In my May 8th post, I mentioned that I had added a display of these state-level win odds to the state detail pages and state comparison pages. I was only displaying the numbers, not any visualizations. As of this week, I am now displaying charts of how these numbers change over time as well.

To illustrate, I'll show examples of the new charts and how they relate to the older charts. 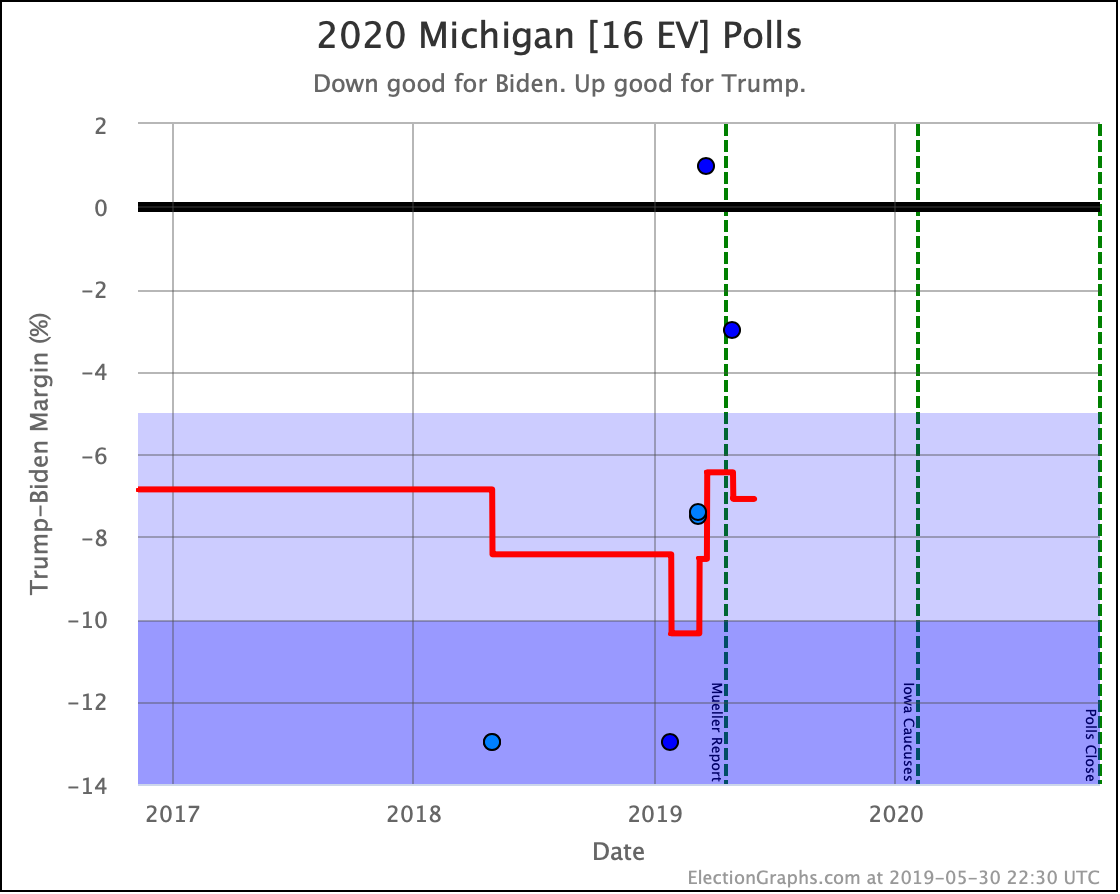 The above is the standard graph for an individual candidate combination and state that has been on Election Graphs since the 2016 cycle. It shows dots for the specific polls and a red line for the Election Graphs average. While this is only a static image in this blog post, on the actual detail page, you can hover over elements of the chart and get more details. 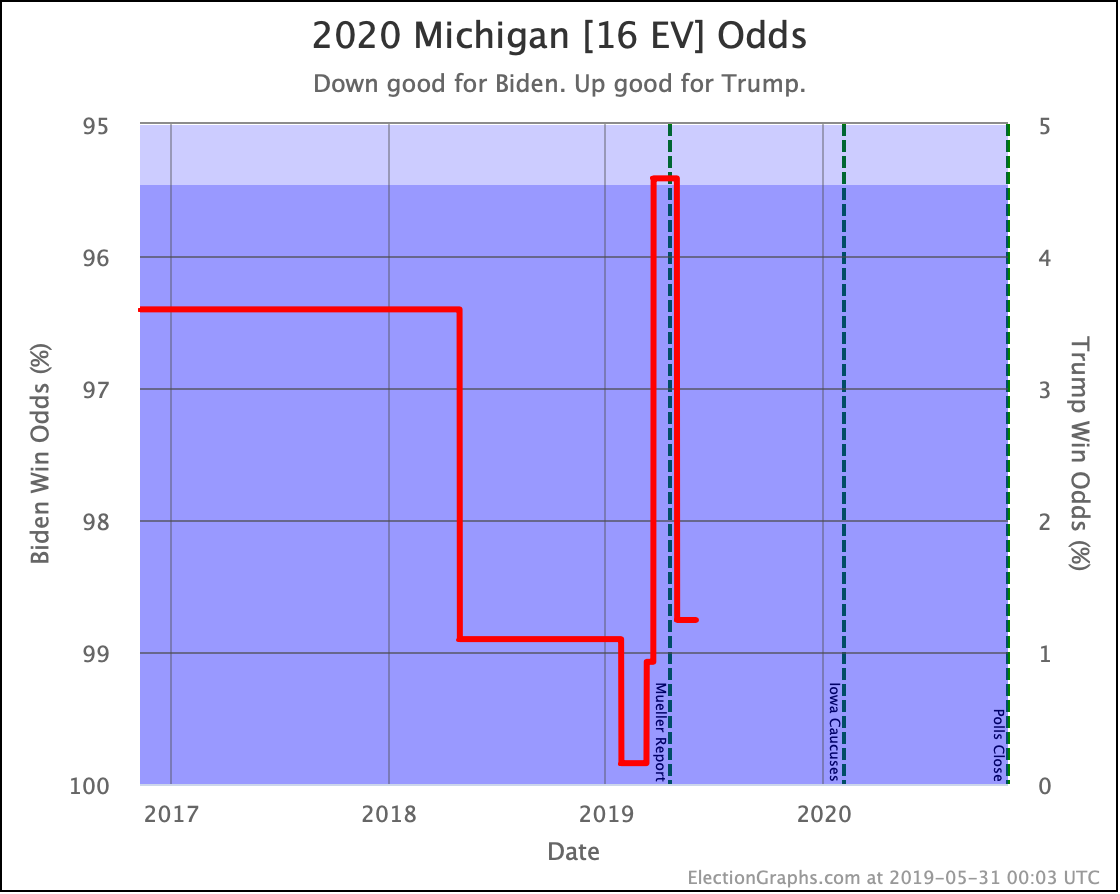 This new view is the graph that I added to the page. It translates the poll average into the chances of each candidate winning the state based on the methodology detailed in that January blog post.

So, in this example, as of right now, Biden has a 7.1% lead in the poll average, which translates into a 98.8% chance of Biden winning the state (or a 1.2% chance of Trump winning). I show the axis labels for the Democrat's chances on the left, but if you prefer, the axis labels on the right show the Republican's chances.

While the first chart does a great job at showing in an absolute way where the polls are, this second chart gives a better idea as to what this means for who is probably going to win and shows how much changes in the poll average do or do not change those odds.

When looking at the state detail page, these two charts are side by side for easy comparison: 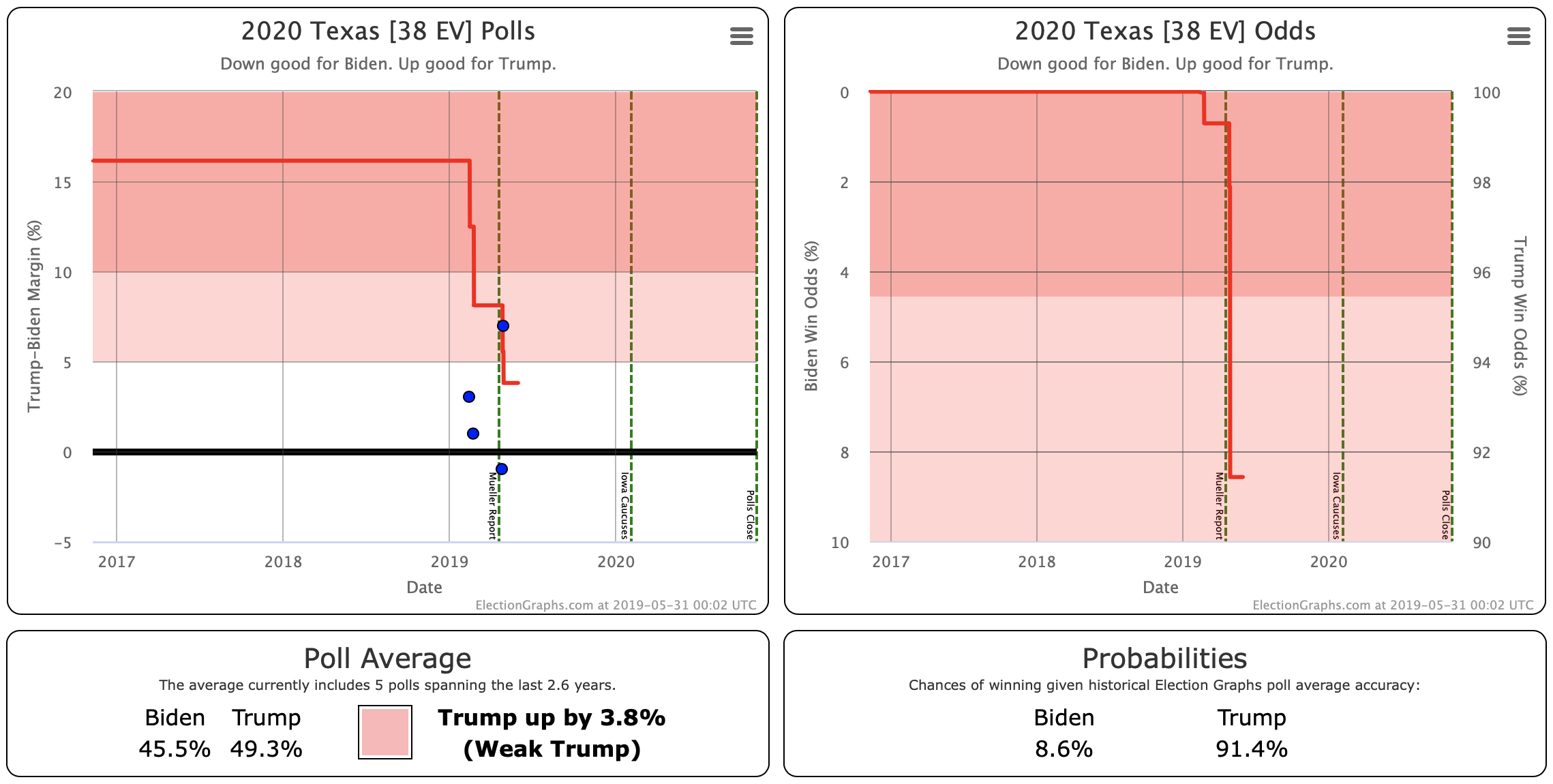 Looking at this example makes clear that the "Weak" category is still pretty broad! That 3.8% Trump lead in Texas translates into a 91.4% chance of Trump winning!

Remember though the following important caveats:

Of course, in addition to the state detail pages for individual candidate matchups, there are also the charts on the comparison page: 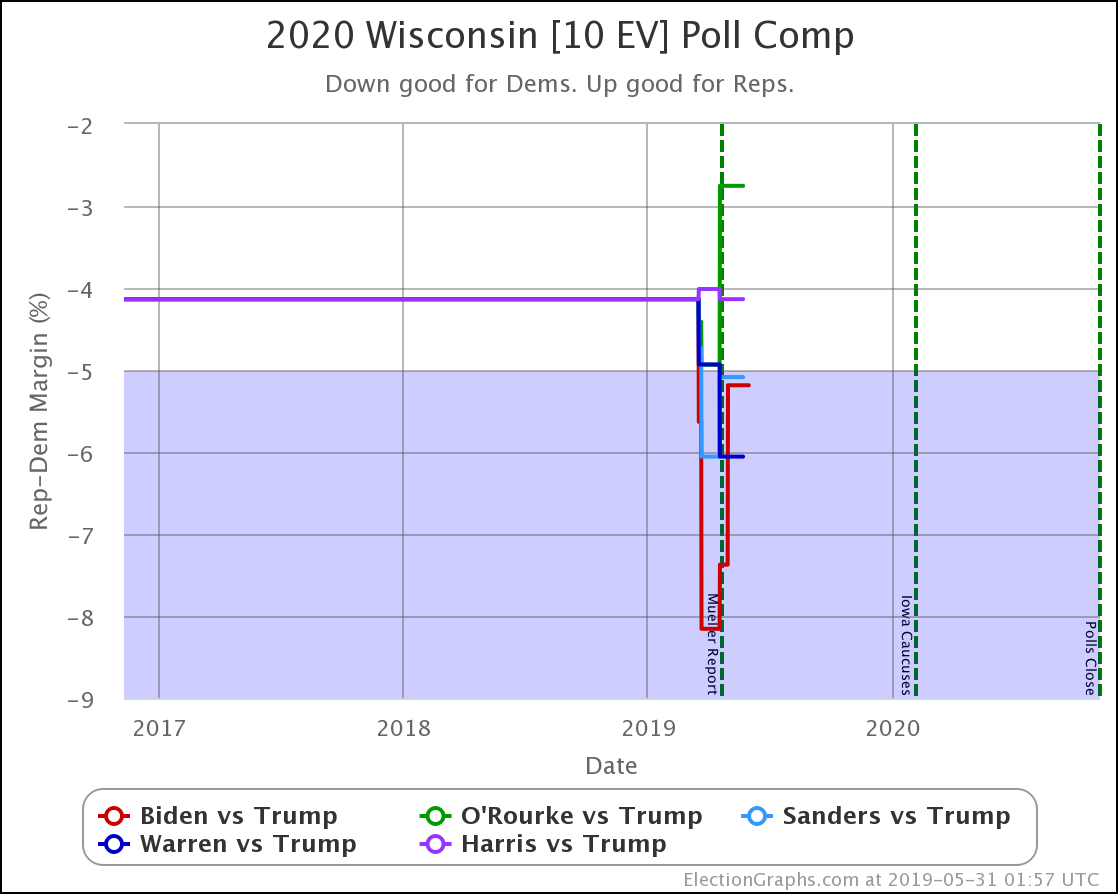 Above is the traditional poll view. 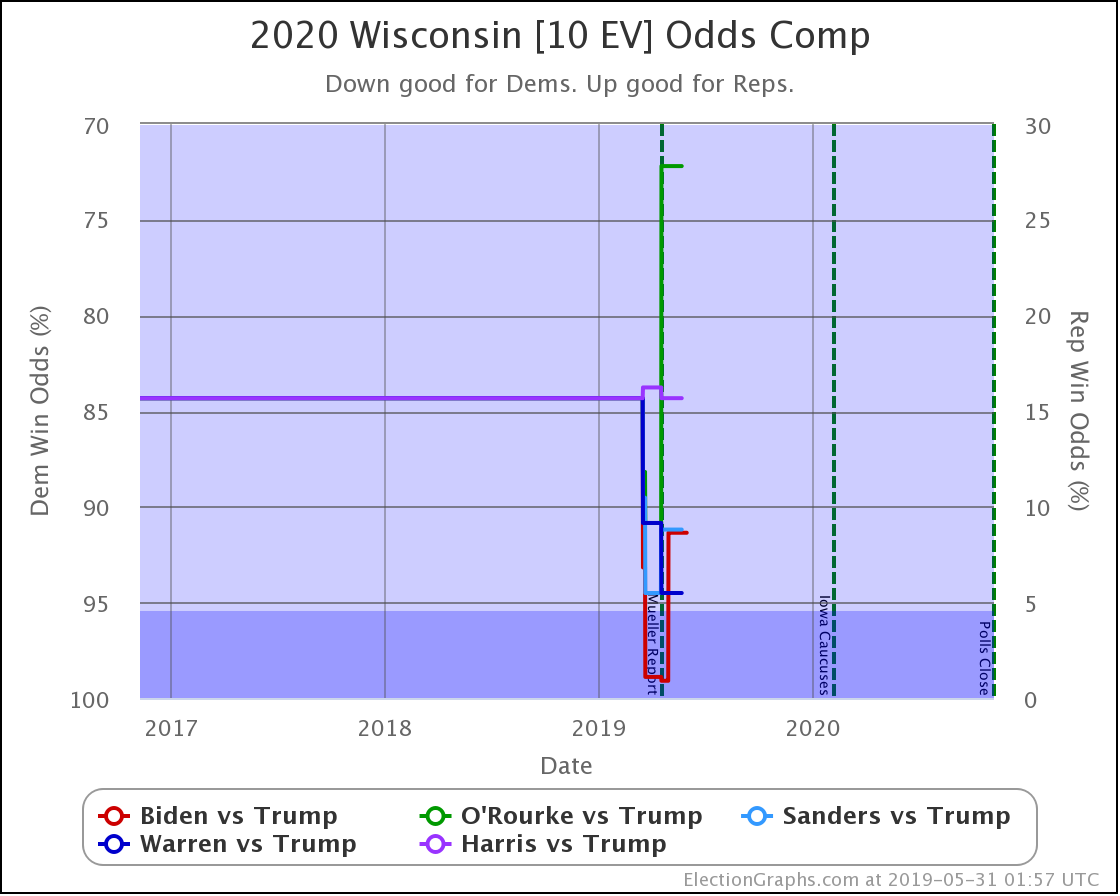 And then the odds based view. The idea is the same as the view for the individual candidate pairs, but of course, you see all five of the best-polled candidate pairs and can compare how they are doing.

Now, all of the new graphs are on state-level views. What about national? How does this roll up into an overall picture of the election?

Well, it is coming but isn't ready yet. As I described in my January 30th post, you can use these state-level probabilities as part of a Monte Carlo simulation to generate some information on the national picture.

I don't have any of that automated and live yet on the site yet, but I have started to build some of the elements. So here is a preview of the kinds of information this will produce.

First, looking at the odds of winning for the five best-polled candidate pairs (with all the caveats I mentioned above) based on the current Election Graphs averages and 1,000,001 Monte Carlo trials each:

These stats differ a little bit from simply looking at the "expected result" where each candidate wins every state they lead in, or looking at the tipping point metric, as these also look at how likely it is that the various close states end up flipping and going the other way. So this should provide a bit better view of what might happen than those simpler ways of looking at things. But of course, that comes at the cost of complexity and being a bit harder to understand.

Another kind of view that will come out of this is looking at the range of possibilities in a bit more sophisticated way than the "envelopes" already shown on the site. Looking at Biden vs. Trump as an example:

So, sometime in the next few weeks, I'll probably get these textual stats added to the live site and automatically updated when I add new polls. After that, I'll try to get some visualizations of both the current state and how that evolves up on the site, but that will take longer.