Welp, results came in pretty quickly for South Carolina. It was clear from the moment that polls closed that Biden had won, and pretty substantially so. The exact delegate totals took longer but settled in a few hours.

Given where we were before South Carolina, Biden only needed 50.95% of today's delegates, that would be 28 delegates, to improve his "% of remaining delegates needed to win" number. He did that easily, and the chart reflects that: 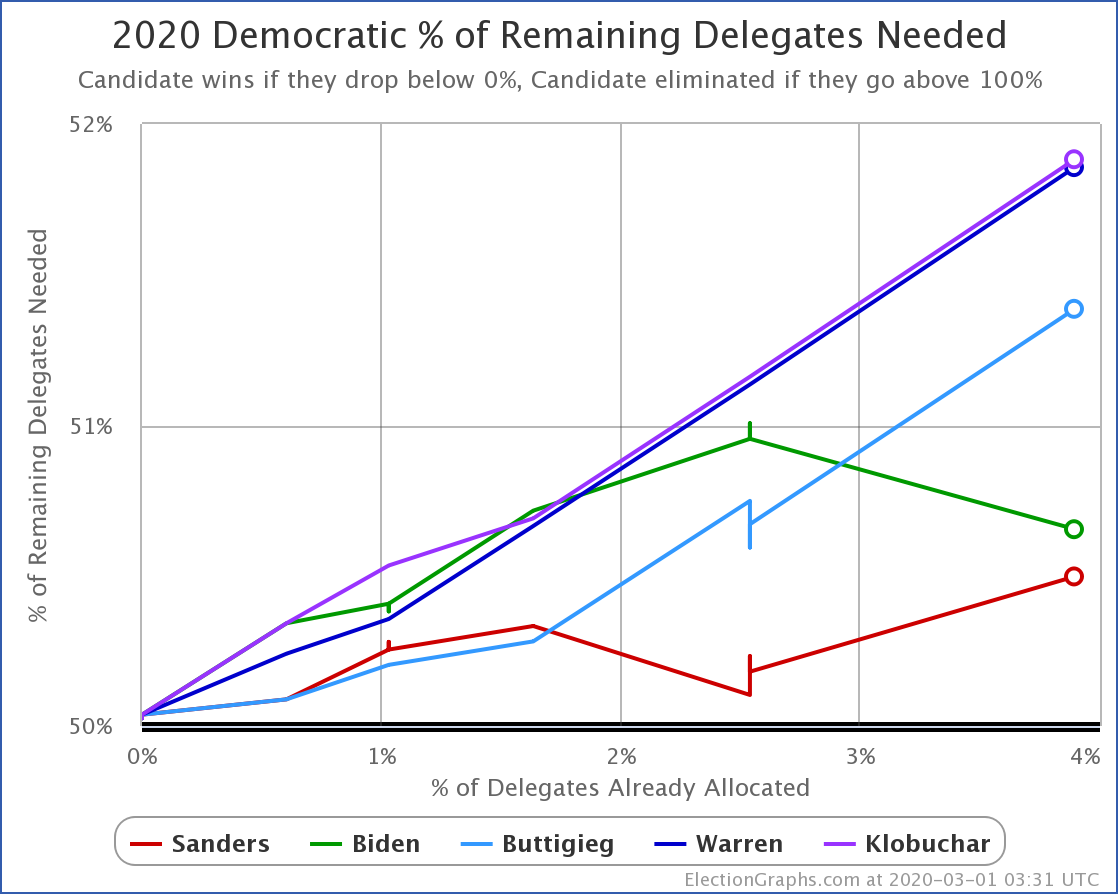 Biden's line curves down, meaning that at least in this contest, he collected delegates at the pace he needed to be on track to get the 1,991 delegates required to win the nomination.

Everybody else's position got a bit worse.

But to be clear, Sanders is still in the best position coming out of South Carolina. He now needs 50.50% of the remaining delegates to win, where Biden needs 50.65%.

Those numbers are still very close to each other. And even candidates with no delegates at all yet, like Bloomberg, only need 52.07%.

From a purely mathematical point of view, the race is still completely wide open. But we do not have a clean slate. We know how candidates are doing in the polls, so have some idea what is coming.

In just three days, we have Super Tuesday, when the results will allocate 1,357 delegates. Right now, Sanders leads in polling averages in many of those states, including some of the biggest ones. Biden leads in a few states as well. Klobuchar even leads in her home state. And Bloomberg is right up there in quite a few as well.

If there is a big enough "Biden bump" coming out of South Carolina, that picture may change. There may not be enough time for polling to measure such a thing if it does indeed happen. So we think we know where things stand from a polling point of view, but there is room for surprise.

Absent that sort of surprise though, nobody seems to expect a big enough Biden bump that Biden could win a majority of delegates on Super Tuesday. So the main question seems to be if all the non-Sanders candidates do well enough to put us on a path where a contested convention is a live possibility? Or will we be on a road where one of them is close enough that catching up is still a live possibility? Or is Sanders going to run away with this thing? 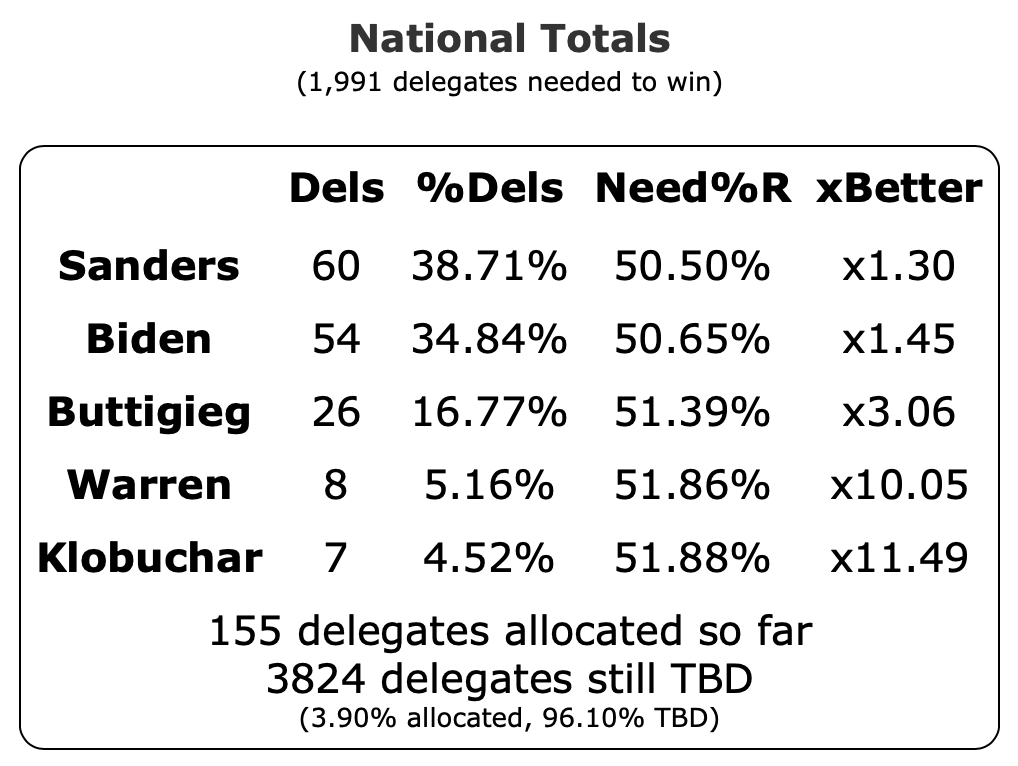 As we said earlier, Sanders needs 50.50% of the delegates to be on a path to an outright win. With 1,357 delegates at stake, that means he needs to win at least 686 delegates for the day. As you start seeing delegate estimates come in, that is the magic number to watch.

You will also want to observe how the other candidates are doing. For a contested convention scenario to be realistic, at least three candidates must be collecting substantial numbers of delegates, and be able to continue to compete even once it is clear they won't reach a majority. Otherwise, it may take a while, but you will eventually end up with an outright winner.

I won't repeat all of the comparisons with previous cycles from the last post. Still, the key thing we'll want to try to distinguish after Super Tuesday using our "% of remaining delegates needed to win" graph is which of several paths we are on:

Now, it may be possible that even after Super Tuesday, it isn't 100% clear which of these is happening. But we should have an idea.

If Sanders blows away 686 and is just raking in the delegates, it will be looking like path 4.

If Sanders is way below 686 (and nobody else unexpectedly gets more delegates than he does), then we are on path 1, the outcome that all election geeks root for every four years, but never happens.

There are 14 states, American Samoa, and the Democrats Abroad voting on Super Tuesday. But 30.4% of the delegates will be coming from California. And another 16.8% from Texas. Add in another 8.1% from North Carolina, and you've already accounted for 55.3% of the Super Tuesday results.

So those states will matter a LOT. And how the second-tier candidates navigate around the 15% thresholds in all of the contests will also be critical.

Right now, in California, Sanders and Warren are the only candidates over 15% in the RCP Average, and Warren is just barely over. If that holds, Sanders might end up taking a massive supermajority of the California delegates. That alone might be enough to ensure that he hits 686 if he even does respectfully in the other states.

In Texas, RCP shows Sanders, Biden, and Bloomberg all over the 15% threshold. Sanders is in the lead, but with the current distribution, all three might get decent numbers of delegates.

In North Carolina, RCP has the same three candidates over 15%, with Biden in the lead, but the other two close behind. This contest is also a state where a relatively even three-way split is possible.

I won't go further down the list. The bottom line is that current polling gives a significant chance that Sanders will rack up a big delegate lead on Super Tuesday.

Unless the Biden bump from South Carolina ends up being huge and upends everything, the question is just how big an advantage Sanders gets, and what that means to the rest of the primary season.

So we'll be watching all those "% of remaining needed to win" lines, and we will see what things look like in a few days.

It will be an exciting evening.

You may even want to tune in to the hourly delegate estimate updates we'll be tweeting over on @ElecCollPolls rather than waiting for the blog post(s) here that we'll post once it looks like the results have stabilized.

2.7 days until the polls close on Super Tuesday.

134.4 days until the Democratic National Convention.

176.4 days until the Republican National Convention.

Update 2020-03-01 16:34 UTC: This post was written when 99%+ of precincts were reporting, and three hours had gone by with no changes to the delegate estimates, but those last few votes did indeed make a difference. Biden took back one delegate from Sanders, making the South Carolina total Biden 40, Sanders 14. This shifts the national numbers to Sanders 59, Biden 55, Buttigieg 26, Warren 8, Klobuchar 7. This changes Sanders' "% of remaining needed to win" to 50.52%. That's still 686 delegates for his target level on Super Tuesday though.

Update 2020-03-01 19:34 UTC: And… it looks like there are still some vote total adjustments happening. Sanders took back two delegates from Biden. This makes the South Carolina total Biden 38, Sanders 16. Which makes the national numbers Sanders 61, Biden 53, Buttigieg 26, Warren 8, Klobuchar 7. So the "% of remaining needed to win" is 50.47%, and the number of delegates Sanders needs on Super Tuesday is down to 685.

Update 2020-03-01 20:33 UTC: Clearly I have to wait longer before making my summary post. I keep thinking we are done. But no. One delegate moves from Sanders back to Biden. So the new South Carolina totals are Biden 39, Sanders 15. Which puts everything back to where it was when I originally wrote this post.