So Michigan, Washington, Missouri, Mississippi, Idaho, and North Dakota got to add their delegates to the totals. The vote counting for last night, and for that matter, Super Tuesday, continues, so the delegate numbers will still be adjusted over the next few days, but we have a pretty good idea h0w things went.

As of the update at the end of yesterday's post, Biden needed 184 of last night's 352 delegates to be on track to win the nomination, while Sanders would need 196 of those delegates.

So how did that go? As of right now, the delegates awarded last night split like this:

Biden easily hit his mark. Sanders came nowhere near where he needed to be.

So what do our "% of Remaining Delegates Needed" lines look like? 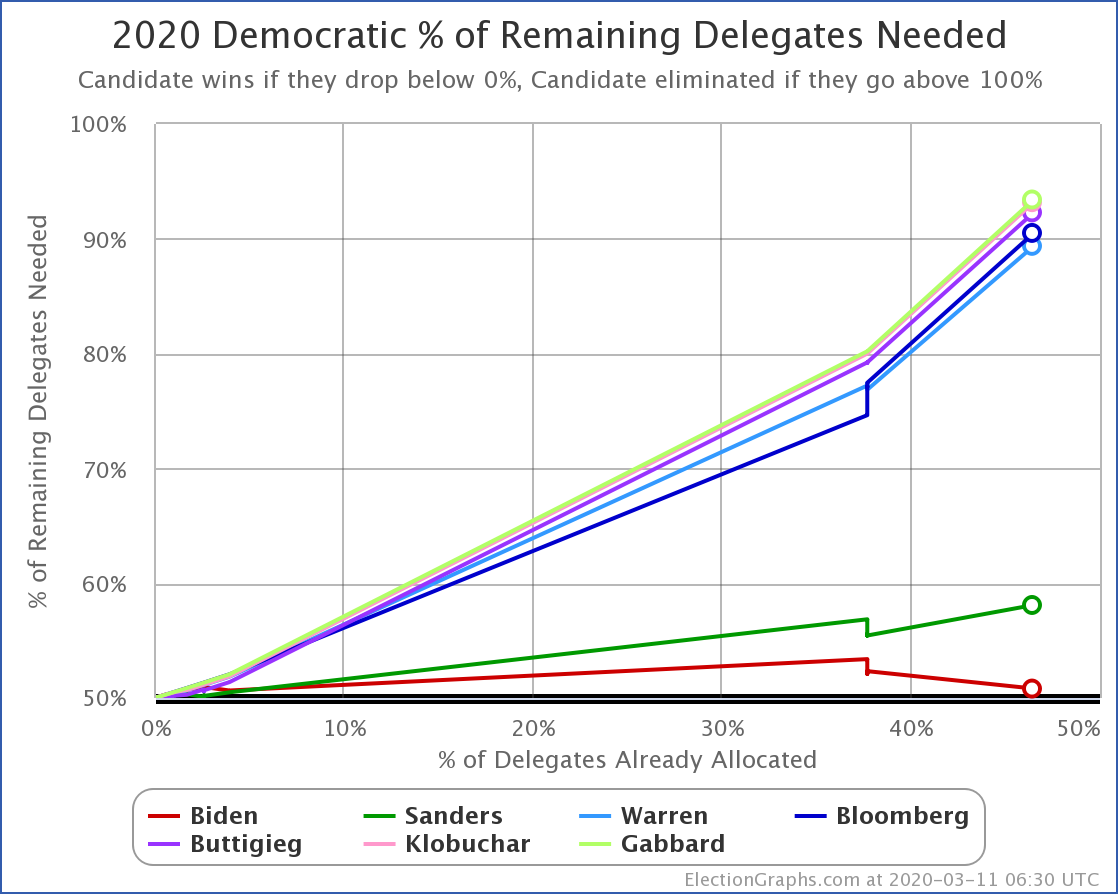 Remember on this chart, heading down is good, heading up is bad. If you hit 100%, you are mathematically eliminated; if you hit 0%, you clinch the nomination.

All the other candidates are racing rapidly toward mathematical elimination. 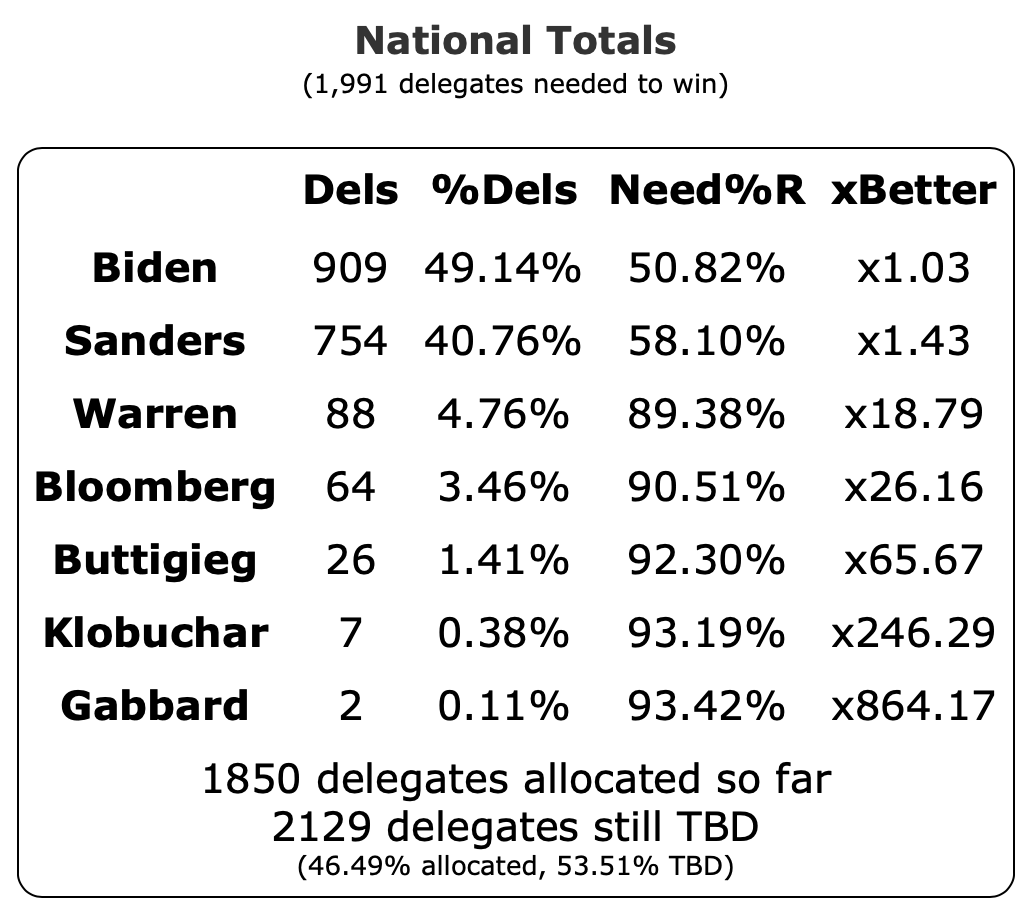 The 55.40% number was already a very high bar for Sanders.

Given the two-person race and the current state of polling, it was hard to imagine Sanders consistently winning the rest of the primary season by a 55% to 45% margin. That is now bumped up to a 58% to 42% margin.

So are there realistic situations we can imagine where this might happen?

You can still imagine situations where this would happen. But given current polling in upcoming states and nationwide, the scenarios that result in a Sanders comeback are increasingly extreme.

At this point, you can't get there through "normal" changes and fluctuations; you need an extreme massive change.

Of course, before completely dismissing that possibility, one has to note that exactly that sort of extreme massive change has happened before. Folks may have to strain their memories, the last time this happened was, uh… two weeks ago.

After the Nevada caucuses on February 22nd, Biden was plummeting in the polls, and things looked incredibly bleak for him. People were talking about how it would take a miracle to revive his campaign.

Then a post-Nevada anti-Sanders backlash began.

And now the March 10th contests.

This has widely been noted as among the most dramatic reversals in polling trends anybody has ever seen. That kind of change is very very rare.

For Sanders to change this picture, that same sort of dramatic reversal would have to happen AGAIN.

What kinds of things might produce that sort of change?

Almost certainly there is nothing that Sanders himself could do to bring it about. You would need a collapse from the Biden side.

Perhaps an actual physical collapse could do it. With the coronavirus scare in full swing, if Biden were to catch it and be disabled by it, that might do it. Maybe a debate performance that was not just bad, but embarrassingly horribly bad could do it too. Something like Bloomberg's disastrous debate. But worse. Maybe.

But you really do have to stretch the imagination to conjure up scenarios where Sanders goes from collecting 40.76% of the delegates so far, to suddenly consistently getting over 58.10% of the remaining delegates, even though his polling doesn't even remotely approach those numbers.

In our summary right after Super Tuesday, we listed the worst positions candidates over the last few cycles had been in prior to going on to win. In terms of the % of remaining delegates needed to win, it looked like this:

Sanders is now at 58.10%. That is worse off than any eventually winning candidate has been since we started doing delegate tracking in 2008. The only one even close was Trump in 2016, but he had the advantage of the Republican winner-take-all states. The Democrats do not do winner-takes-all.

To be generous, lots of folks are saying that maybe Biden needs one more set of states… Florida, Illinois, Ohio, and Arizona on March 17th… before we can really say Sanders is done and Biden has won this thing. And it won't be mathematically over until even later.

124.2 days until the Democratic National Convention.

166.2 days until the Republican National Convention.

One thought on “Almost Done Here” 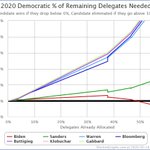 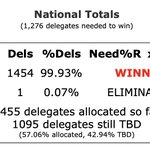 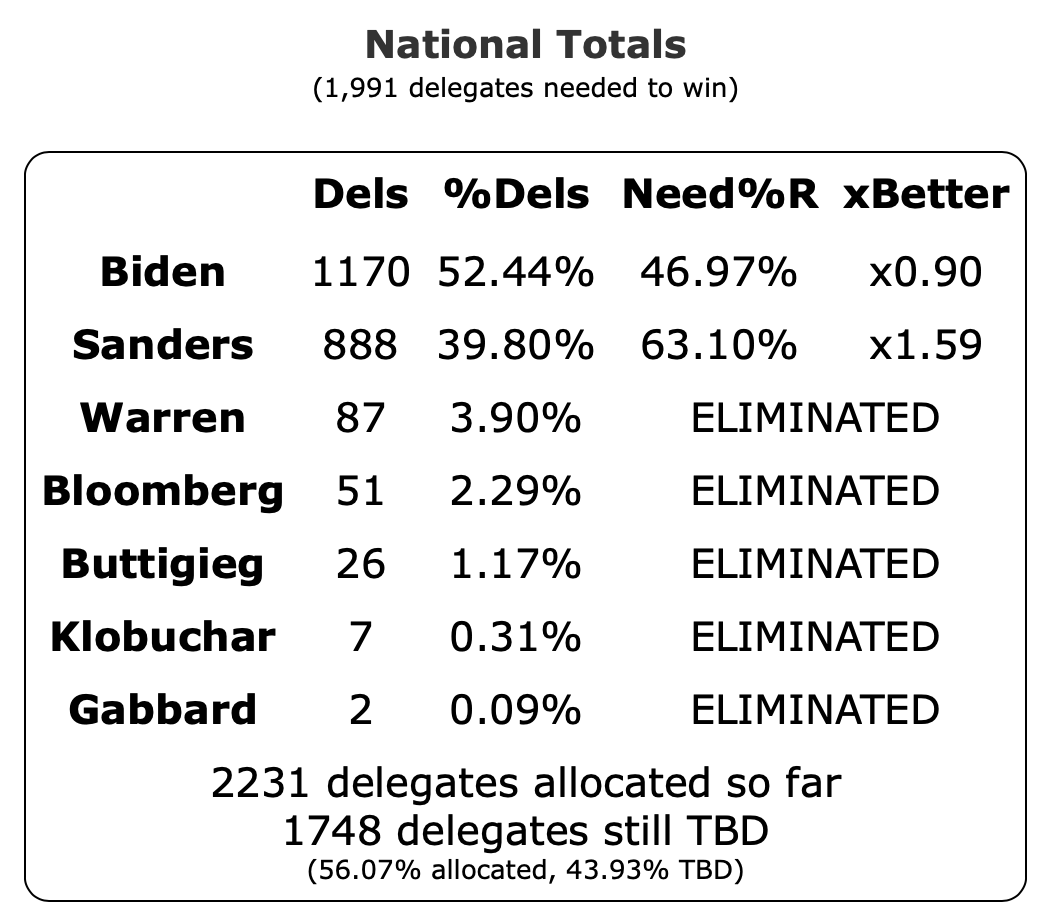 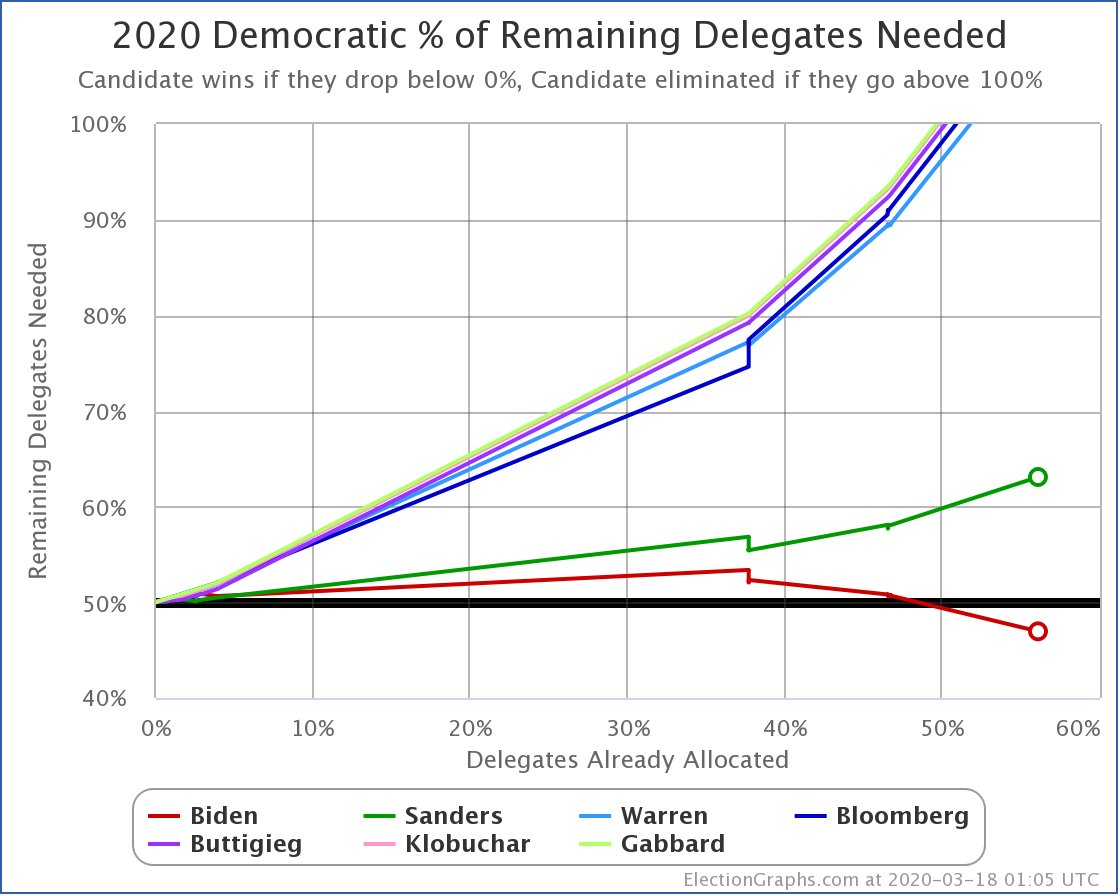 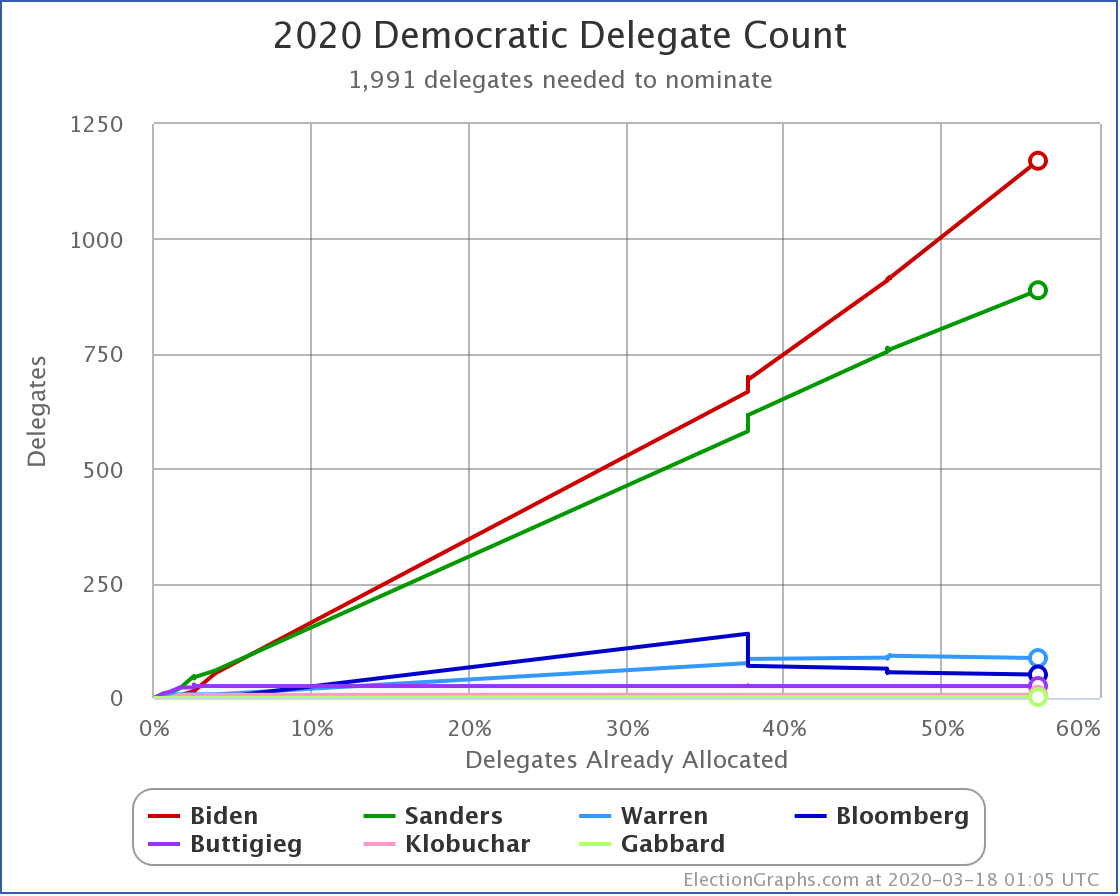 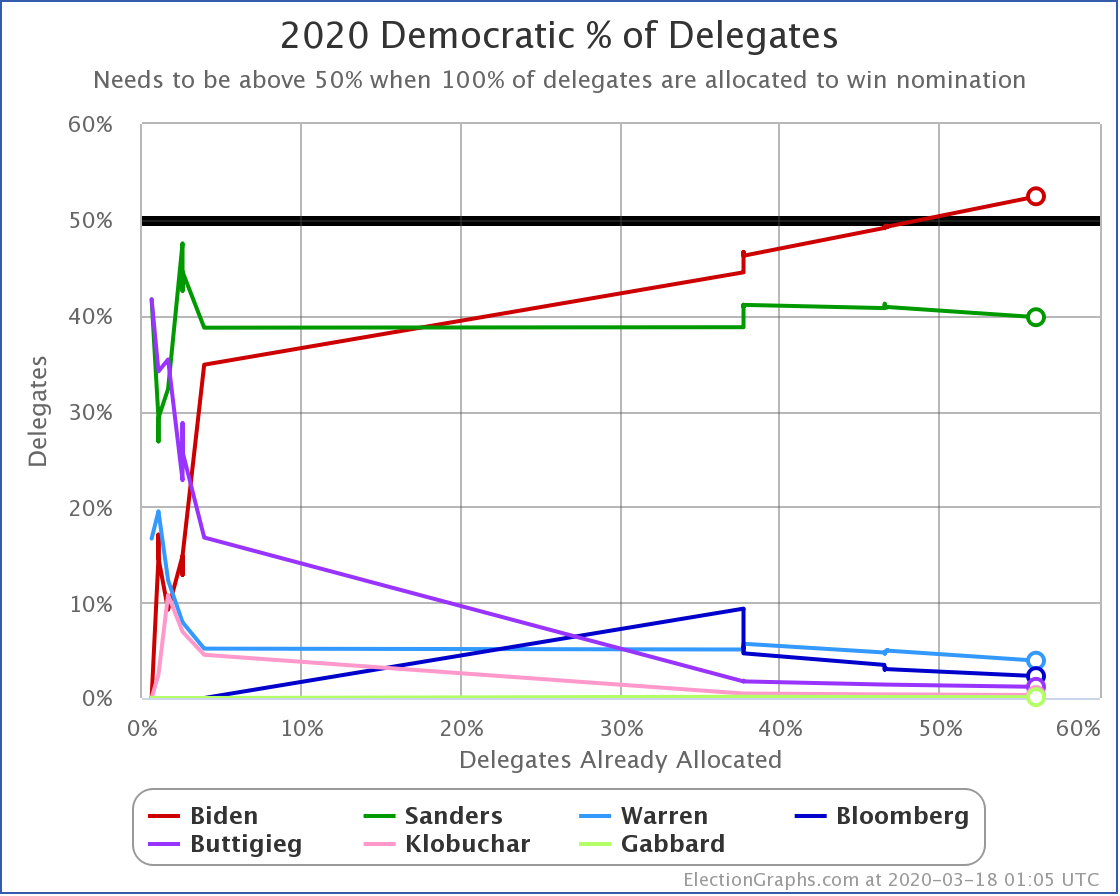 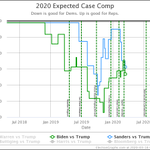 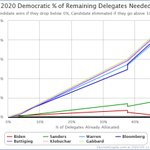